E3M8: Dis is the eighth and final map of Inferno in Doom. It features a boss battle with the spider mastermind. Dis is named after the capital city of Hell that appears in the first cantica (also entitled "Inferno") of Dante Alighieri's epic poem Divine Comedy. It was designed by Sandy Petersen and uses the music track "Facing The Spider". This level should not be confused with the Jaguar level of the same name, MAP23: Dis (based on the Fortress of Mystery), which that level replaces in that version.

In the Sony PlayStation and Sega Saturn versions of Doom, this level was replaced by MAP23: Tower of Babel as the final map of Inferno. 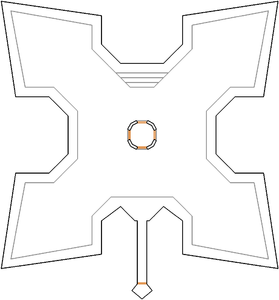 To complete this level, the player must kill the spider mastermind, who is the boss for the episode.

She appears on the bottom right 'clover leaf' of the map (A) with a baron of Hell (on harder skill levels) in the top left leaf and two cacodemons occupying the other corners of arena. Almost all ammo is on a raised walkway above the main arena containing mostly of rockets and a few cells (B), except for the plasma gun, which is in a small room in the center of the map (C). The only way to access the walkway is from a set of steps to the north of the central building, or by walking along the walkway upon entering the level. This lack of ammo provides extra challenge and you are vulnerable to the spider's hitscan attacks. As there is barely any cover (except for the thin pillars of the circular room where the plasma gun and megaarmor is located), to protect yourself from the spider's bullets, moving quickly is key to survival here. There are no health items here, so make your health count!

An effective strategy for this level is to deliberately cause the other monsters present on the level to attack the spiderdemon. The spiderdemon will then become preoccupied infighting with the other monsters and will ignore the player's fire until the attacking monsters are killed. For example, you can move behind a cacodemon, and the spider will try to fire at you, but will fight the cacodemon instead. Fire at the spider from behind the cacodemon, but do not fire at the cacodemon itself. Eventually, the spiderdemon will kill the cacodemon, but the combined forces against the boss will cause it to die faster (see demo below). This method is a good way to distract the spider in battle so you can collect the ammo that is sitting the outer ledge. As a consequence of the extra ammo and monster respawning of Nightmare skill, this is one of the few levels that is generally easier in Nightmare mode than on Ultra-Violence.

One way to easily kill the spiderdemon is by saving the BFG9000 until reaching the level.

Nineteen rockets (Things 35-53) have no flags set for any of the difficulty classes, so they do not actually appear in the level.

* The vertex count without the effect of node building is 105.