E3M8: Earthquake is the eighth and final map of episode 3 of Heretic Treasure Chest. It was designed by Dreadopp and uses the music track "Atcoty" from Heretic, created by Kevin Schilder. 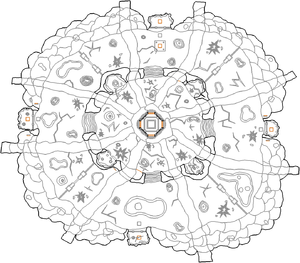 Map of Earthquake
Letters in italics refer to marked spots on the map. Sector, thing, and linedef numbers in boldface are secrets which count toward the end-of-level tally.

This level is divided into central and outer areas joined by staircases; you start in a niche in the central arena. Take the Dragon Claw and Ethereal Crossbow in front of you then step outside and turn right, heading towards some steps on the south side of the central arena. Climb the steps then turn right again and step over the lava river to a switch guarded by three golems, which will open a silver gate behind you leading to the west side of the outer area. Go through it and destroy the golems and gargoyles ahead as they teleport in, then go through the nearby door to a teleporter guarded by one or two disciples of D'Sparil. The teleporter will put you on a ledge above the south-west side of the outer area - follow the path north-west past some weredragons, collecting a Phoenix Rod on the way, until you reach a switch near the teleporter you just used.

The switch will open another gate on the south side of the outer area - kill the golems, sabreclaws, weredragons and gargoyles that teleport into this area then step into the teleporter behind them to reach a ledge to the east. Follow the rocks east and north to another switch and press it to open a third teleporter just below you, kill the enemies that teleport in then use the teleporter you just opened to reach the ledge on the north-east side of the level. Follow the rocks east and south past some weredragons and nitrogolems to a fourth switch, which will open the final teleporter on the north side of the outer area. Kill the enemies that appear near this teleporter, including one or two iron liches, then step on the teleporter (you will collect an Enchanted Shield as you do so) to reach the rocks on the north-west side of the level. Follow the rocks west and south, collecting a Hellstaff on the way, until you reach a Mystic Urn next to the final switch.

Collect any remaining items from the outer area before you return to the central arena, as you will not be able to leave it until D'Sparil is killed. Approach the gray tower in the middle of the arena and open any of the doors to find D'Sparil and his serpent surrounded by (depending on skill level) two, four or six maulotaurs - focus your attacks on D'Sparil as much as possible, as any other monsters in the level will die when he is killed. Once D'Sparil has been killed you will be able to climb the staircases again - head up the north staircase and enter the gray teleporter that has lowered ahead of you to finish the game.

On some source ports the steps leading out of the central arena will not rise when D'Sparil is killed, preventing you from climbing the staircases. If this happens, lower the lift leading up to secret #2 then run north to land on a stepped rock below; from here you can quickly run south-east to land on the south staircase leading out of the arena. Do not stand on the stepped rock for too long as there are two volcanoes hidden inside it which spray fireballs at regular intervals.

* The vertex count without the effect of node building is 11009.