E3M8: Point Hellfire (M_SAW01.WAD) is the eighth map in the Armageddon episode of ZPack. It was designed by Paul DeBruyne (skillsaw) and uses the music track "Crucifix Held Close" from Castlevania: Portrait of Ruin, composed by the Konami Kukeiha Club and arranged by Michiru Yamane, in a MIDI version sequenced by Jayster. The par time defined in MAPINFO is 26:00. 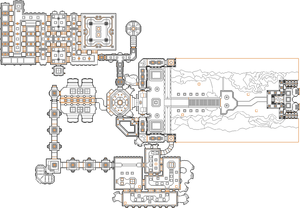 Map of Point Hellfire
Letters in italics refer to marked spots on the map. Sector numbers in boldface are secrets which count toward the end-of-level tally.

* The vertex count without the effect of node building is 19576.