E3M8: Requiem is the eighth and final map of the Woe episode of No End In Sight. It was designed by Emil Brundage (NaturalTvventy). 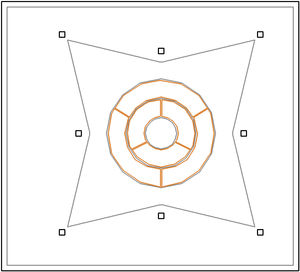 Map of Requiem
Letters in italics refer to marked spots on the map. Sector numbers in boldface are secrets which count toward the end-of-level tally.

As the level starts there is a tower behind you; the walls of the tower will open when shot by yourself or monsters, revealing a spiderdemon in the middle that must be killed to finish the level. This level offers very little cover so try to get the spiderdemon to infight with other monsters and kill it as fast as possible.

This information was last verified in its entirety on August 16, 2021.

* The vertex count without the effect of node building is 198.