E3M8: Shop S-Mart is the eighth and final map of Army of Darkness TC. It appears as MAP08 in the PWAD's Doom II conversion. It was designed by Stefan Maes and uses the music track ? by Rick Sparks (Suture). The level is a modification of warhouse.wad by Mike Barker that was released April 19, 1994. 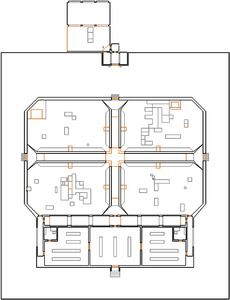 Map of Shop S-Mart
Letters in italics refer to marked spots on the map. Sector numbers in boldface are secrets which count toward the end-of-level tally.

"This was one easy level to build. It wasn't built from scratch, you see. It was based on warhouse.wad by Mike Barker, one of the very first WADs I downloaded and gave a permanent spot in my very selective collection of good WADs."
― Stefan Maes[1]