E3M8: The Shadow and the Flame (Curse of D'Sparil)

E3M8: The Shadow and the Flame is the eighth and final map of Curse of D'Sparil. It was designed by Kristian Käll (Kristus) and uses the music track from Heretic's E1M9: The Graveyard. 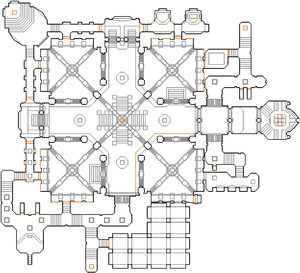 Map of The Shadow and the Flame
Letters in italics refer to marked spots on the map. Sector numbers in boldface are secrets which count toward the end-of-level tally.

Step off the teleport pad you start on to collect a Bag of Holding - the pad also holds a Dragon Claw and Enchanted Shield on easy skill levels, a Silver Shield on medium, and no extra items on hard. Shortly after stepping off the pad, you will come under attack from multiple copies of D'Sparil without his chaos serpent - two on easy, three on medium and four on hard. Only one has to be killed, as doing so instantly destroys all other monsters in the level.

As well as the D'Sparils, the starting area is overlooked by a number of gargoyles; sabreclaws, undead warriors, golems and ophidians can also be found in the outlying areas depending on skill level. These monsters are largely a distraction, but can present an obstacle when avoiding the D'Sparils' attacks.

If you need more weapons or ammo, climb to the raised platforms surrounding the start point. Be aware that the D'Sparils may teleport to these platforms when injured or under attack.

Once one of the D'Sparils is killed, every monster in the level will die with him. A wall due east of the start point will lower, revealing the exit teleporter - step into it to complete the game.

An Enchanted Shield can be found at the top of the stairs due west of the start point on easy and medium skill levels. On hard, a Silver Shield will appear here instead.

A Chaos Device can be found between the staircases due north of the start point on easy skill levels. On medium and hard, a Mystic Urn will appear here instead.

* The vertex count without the effect of node building is 4629.