E3M9: City of the Lost Hope (Masters of Chaos)

E3M9: City of the Lost Hope is the ninth map in the Shadowlands episode of Masters of Chaos. It was designed by Caleb26 and uses the music track from Heretic's E1M5: The Citadel. 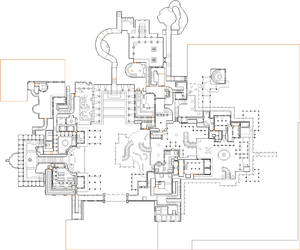 Map of City of the Lost Hope
Letters in italics refer to marked spots on the map. Sector, thing, and linedef numbers in boldface are secrets which count toward the end-of-level tally.

Head forward and turn right at the junction, then follow the walkway south and west (you can head east instead to find an Ethereal Crossbow if you need one). You will see a staircase on your right between two braziers - climb it and approach the building ahead, then go round to its south side and pass through a stone door to enter the building. Kill the waiting golems and undead warrior ghosts, then climb the stairs and turn right to go through the door ahead.

You will enter a room with two beds - go through the next door to the south and kill two nitrogolems waiting behind it, then take the Dragon Claw and press the switch in the corner. Go back to the stairs and head through the now-open door next to them, then go through another door on your left and press the switch in the north-west corner which is guarded by a disciple of D'Sparil. Go back to the stairs and kill the gargoyles and one or two ophidians that have been released, then leave the building through the stone door you used earlier.

Turn left and head round the building until you see a fountain in front of you. A door has opened due north of the fountain - go through it and then climb the stairs on your right, killing the undead warrior at the top and going through the door it was guarding. Slay the golem ghosts in this room then go through either of the wooden doorways, turn left and press the switch ahead. Leave the building to find that numerous enemies have appeared outside, including a Bormereth.

Return to the start point and turn left at the junction this time, following the walkway north and west until you reach an area with crates. Head east up the steps and continue following the walkway to a door that will let you get inside the green building. Climb the curved staircase inside it to the top and kill a knight archer and two vampires before taking the blue key.

Backtrack to the fountain area and head west to find a wooden staircase, then follow it to a higher floor. Take out the archers in this area then head south-west past the large trees to another staircase. Follow this staircase down and take the Silver Shield behind the hedge on the right, then head north through a stone door. Destroy the golem ghosts here then go east down some steps to find two doors, one wood and one stone. Go through the wooden door and follow the passage, dispatching the sabreclaws and archers that rise from the floor, to a door flanked by blue key gizmos. Open it, kill the waiting ophidian and press the switch.

The bars to your right will lower; go through them to a chamber with fire gargoyles and one or two roaches. Prepare your weapons and artifacts before pressing the switch in the north-east corner, as three floors holding numerous enemies will lower behind you. Kill them, then backtrack to the stone door you passed earlier and go through it, heading north-east down a curved set of stairs. At the bottom, turn right to see that a wall has lowered revealing an ophidian and two weredragons. Kill them then go through the wall and go up another curved staircase.

When you reach the top of the stairs, an alcove will open ahead and release green chaos serpents - kill them then go through the wooden door next to their alcove and follow the stairs down to a fenced ledge. Go round the corner and destroy the sabreclaws ahead, then go through the stone door they were guarding to a tall chamber with nitrogolems. Climb the steps and press the switch at the top to lower two pillars; take the Tome of Power from the east pillar then step into the teleporter next to it.

You will find yourself in the water west of the blue key building. Go into the tunnel in front of you and press the switch on the left to lower a wall and reveal three or four roaches; kill them then enter the alcove they came from to lower another wall. Continue following the tunnel and go through an archway on your left to reach an area with two large columns. Head north-west and climb up the wooden steps, destroy the waiting sabreclaws then head east to press a switch which will raise a staircase behind you.

Climb this staircase and kill the shadow beast waiting at the top, then turn right and follow the wooden ledge to another switch. Pressing it will lower a lift behind you with a Bormereth on it - kill the Bormereth, then press the switch again and ride the lift up to a set of steps leading to a river. Follow the river south (watching out for a wall that opens on the left to reveal three weredragons) until you reach the yellow key at the end.

Take the yellow key and head over the waterfall behind it. As soon as you land, turn left to collect a Firemace then look south to see various enemies teleporting in including two iron liches. Once they are dispatched, head south from the waterfall until you reach a wooden pier then go due west to a stone platform. You will see a wooden staircase in front of you with locked doors on either side - turn right and go through the door with yellow key gizmos to a room with a red floor.

Kill the undead warriors in front of you then climb the steps by the east wall. Turn left at the top, then go right at the junction and head forward until you pass a staircase. Turn right to kill a waiting nitrogolem then go through the door it was guarding and press a switch in a bookcase on your right, which will reveal a passage behind you containing disciples. Kill them and press the switch they were guarding, then leave the room and go back down the passage past the staircase. You will see that a door on your left has opened - go through it now.

Destroy three sabreclaws in the next room then press use on the bookcase by the east wall; it will lower and reveal three more sabreclaws guarding a switch. Press the switch to lower another bookcase - kill the golems and ophidian behind the bookcase and press another switch behind them, which will allow you to reach the green key. Retrace your steps to leave the building and head west up tche wooden staircase you saw earlier. At the top, head forward to find the key on a raised step.

Taking the green key lowers two platforms behind you holding a Morph Ovum and a Quartz Flask. Take these items then go back down the staircase and turn right at the bottom to go through a door with green key gizmos, entering a room with tables and benches. Kill the archers and butchers here, then look north to see one or two undead warrior ghosts behind a bar. Jump over the bar and turn left to see a door. Go through it, press the switch in the small chamber then step into the teleporter that lowers on your right.

Go through the door in front of you and turn left, following the passage round until you see a brightly-lit wooden area with a switch. Press it then head back along the passage to find that two platforms holding sabreclaws have lowered. Destroy them then look the east platform to find that another switch has been revealed next to it - press this switch then return to the building entrance and head south up a set of wooden steps, destroying an iron lich waiting at the top.

Head east to see two doorways in front of you - go through the right-hand doorway and climb the staircase to the top. Follow the passage past some golems and archers to another switch and press it, which will lower the wall on your right to reveal nitrogolems and disciples; a second wall will lower to the east and release chaos serpents. Fight your way out of the trap then go back down the steps and return to where you fought the iron lich - bars have lowered to the west allowing you to cross a bridge.

Kill the golems and nitrogolems approaching from the other side of the bridge then cross it, following the passage to a staircase that leads down to a wooden door. Go through the door to enter a hallway lined with decorative pillars, then turn left to dispatch three approaching sabreclaws. Follow the hallway around the corner to see the exit door being guarded by a Bormereth - kill it then head through the door and press the switch behind it to finish the level.

After entering the building north of the fountain, turn left and go through the door in the south wall, then turn right and follow the passage past two golems to find a Blood Scepter. Taking the weapon will lower a wall to the east, releasing nitrogolems and a butcher.

From the fountain, head west and climb the wooden stairs to the top then head north through an arched tunnel. Follow the stairs here to the bottom to reach an area with a Phoenix Rod, guarded by nitrogolems and an undead warrior. From this point, go back up the stairs and head due south to a door leading into a building with tables and benches. Head south and west through the building past some archers to find Gauntlets of the Necromancer on a red table.

From secret #4 below, step on a lift by the south wall to be carried up to a staircase guarded by an undead warrior ghost. Kill it then follow the stairs and open the stone door at the top, then follow the passage past a nitrogolem ghost to a wooden door. Behind this door is a Skull Staff.

After reaching the top of the staircase due east of the blue key door, go through the door on your right and head towards the chandelier in front of you. Turn left and left again to find a staircase leading to an Enchanted Shield and two Timebombs of the Ancients.

West of the waterfall with the yellow key is a storage area with lots of crates. A Shadowsphere can be found in the south-west corner of this room, and it also provides another way to enter the building requiring the yellow key.

From the step with the green key, head north and climb some stone steps to reach an arched tunnel. Follow the staircase behind it down to a grassy area, then kill the two butchers ahead and head north-west to find a staircase leading up to two more butchers. Open the door next to them to find a Tome of Power being guarded by three or four disciples.

* The vertex count without the effect of node building is 6755.

This level contains the following numbers of things per skill level, not including chaos serpents or Discs of Repulsion which are spawned via scripts: