E3M9: Cyberslayer is the ninth and secret map in episode Hellish Extermination of ConC.E.R.Ned. It was designed by Matt Powell (cannonball) and uses the music track "Triangle of Fear," originally composed by Mark Klem for Memento Mori. 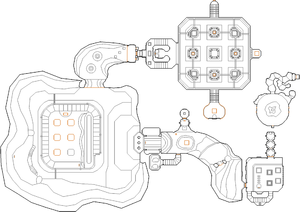 Map of Cyberslayer
Letters in italics refer to marked spots on the map. Sector, thing, and linedef numbers in boldface are secrets which count toward the end-of-level tally.

This level starts in exactly the same manner as E3M1: Passover; however, after pressing the skull switches and entering the south teleporter, you will find yourself in a passage with some imps. Take the shotgun and armor if you need them then go forward to a large room with two cages where a cyberdemon will appear (two on Ultra-Violence (UV) and Nightmare (NM) skill levels). Follow the ledge you are standing on past some spectres to a curved staircase and follow it down to the bottom floor, then run up the marble steps on your left to reach the blue skull key along with a switch that will crush the caged cyberdemons.

Go back up the curved staircase and open the blue key door on your left to find a chaingun that you can use to kill some approaching demons, then head north-west through a red archway and you will see the wall ahead lower to reveal a cyberdemon (two on UV and NM, and the second cyberdemon will teleport to your location) guarding a teleporter. Step on the teleporter to reach a nearby ledge then turn round to press a skull switch behind you, which will lower the large marble wall to reveal a hole containing cacodemons; collect the rocket launcher on top of the wall then drop down the hole to relative safety, where some shotgun guys are guarding a skull switch.

Pressing the skull switch will lower the wall in front of you, revealing a large outdoor area; ahead is a lava pit containing tall platforms that hold three cyberdemons (six on UV and NM) which you will have to dodge. Head forward to the fence and go round to its south-west side to find some steps that lead up to a gang of imps guarding a skull switch; press the switch then go round to the south-east corner of the fence where some bars blocking another staircase have lowered. Follow the steps all the way down past some imps to another skull switch, which will lower a teleporter on the north side of the steps, then quickly run back up to catch this teleporter before it rises again. You will teleport between the red platforms and telefrag each cyberdemon in turn, before reaching the yellow skull key on the sixth platform.

Leave the fenced area then head north to an area with two circular white steps, kill the demons that teleport in then head east to a yellow key door; watch out for barons hiding behind the walls on either side. Go through the door and head past some a demon and some shotgun guys to some steps, then kill a couple of imps before walking west to a skull switch protected by spectres. Pressing the switch will reveal a large arena behind you with nine towers, protected by one to four cyberdemons standing on platforms and another two to six cyberdemons that can move freely. Take the BFG9000 in the middle tower if you need it then press the gargoyle switches in the north, east, south and west towers to remove some barriers on the north and south sides of the room; on the south side is a false teleporter that will crush the cyberdemons on the platforms when stepped on, and on the north side is a skull switch that will lower some bars in front of a teleporter on the east side of the room.

Entering the teleporter will return you to the starting area, telefragging the cyberdemon that was on guard. Head through the north wall that has lowered and follow the steps down to the exit portal.

An invulnerability is hidden behind the teleporter in the yellow key area.

Just before reaching the exit portal, duck into an opening in the right-hand wall to find a megaarmor and a supercharge.

* The vertex count without the effect of node building is 2737.