E3M9: Lake of Fire is the secret map of Inferno in Doom the Way id Did, which can be accessed from E3M6: Depths. It was designed by Christopher Lutz in the style of Sandy Petersen. The par time defined in the DEHACKED lump is 1:30.

Completing this level takes the player to E3M7: Inner Sanctum. 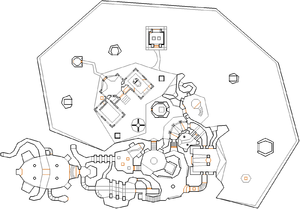 Map of Lake of Fire
Letters in italics refer to marked spots on the map. Sector, thing, and linedef numbers in boldface are secrets which count toward the end-of-level tally.

Open the door in front of you to appear in the field. In here, the area is quite reminiscent of E3M6: Mt. Erebus from the original game. Enter the northwest building. The yellow door is straight ahead, and it leads to the exit, but you want to go right first. On this raised walkway, the blue key is on the other end so take it. Now exit this building. Go through the blue door in the south center of the main field. Here, head to the far western room. In here, you need to raise a bridge to cross the lava river. Go into the side room to the south to find the switch to do so. When you grab the yellow skull key, look out for several monsters to your sides. Also be wary as some enemies may be out and about on the field as you exit. Return to the northwestern building and take the yellow door to leave.

If you want a rocket launcher, head east through the tunnel and you will see it on a pedestal. Press the switch to raise stairs to it.

* The vertex count without the effect of node building is 1280.