E3M9: Lake of Fire is the fifth map of the Woe episode of No End In Sight. It was designed by Christopher Lutz. It is also featured in Doom the Way id Did as the level with the same name.

Despite being in the E3M9 slot, this map is considered part of the normal map progression and can be accessed via the "normal" exit from E3M4: Fortuna Bridge and E3M5: Forgotten Caverns (as well as the only exit from E3M6: Anomaly Retribution). As M5 and M6 are both treated as secret maps, accessing this level from M4 or M5 will cause you to skip part of the episode. 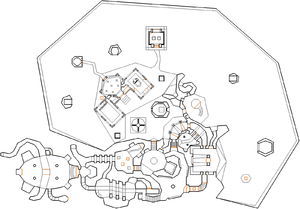 Map of Lake of Fire
Letters in italics refer to marked spots on the map. Sector, thing, and linedef numbers in boldface are secrets which count toward the end-of-level tally.

Go through the door and you will see a set of gray steps in front of you. Climb these steps and open the door at the top to confront some monsters guarding a shotgun and health bonuses, then go through the opening in the east wall to reach a walkway around a damaging blood pool. Step round to the north-east corner of the walkway to find the blue skull key - watch out for a cacodemon that appears in the cage inside the blood pool, as well as some imps that are released from a monster closet.

Leave the building and head south from the start point to a door between two blue firesticks, then go through to a room with a cage holding two imps, or a cacodemon on Hurt Me Plenty (HMP) skill level or higher. Head west through a door then walk between two red flesh columns before going west over some lava streams to confront two demons, or a baron of Hell on HMP or higher. After crossing the streams, turn left at the junction then go through a door to a large room with a lava river running through it. Walk through an opening in the south wall (between two blue firesticks) then climb some stairs, kill a waiting spectre and press the skull switch behind it to raise a bridge over the lava river. Cross the bridge to find the yellow skull key on a step, but watch out for two monster closets that open either side of you when you approach the key.

Return to the building where you found the blue key, watching out for any monsters that have been released, and go through the north-west door which requires the yellow key. Follow the bridge to the exit door, kill a demon waiting behind it on HMP or higher then press the skull switch to finish the level.

A shotgun can be found in an alcove behind the starting building. From this alcove, go east through a wall opening to find a platform holding a rocket launcher - press the skull switch on the west wall to raise some steps leading up to the platform.

After entering the blue key building, go into the south-west room and follow the passage round to find a chaingun. Taking the weapon will lower a nearby platform with zombies and imps.

In the room with the red flesh columns, head north-east to find a partial invisibility at the end of a bridge. The bridge will drop away when you cross it.

* The vertex count without the effect of node building is 1312.

This level draws some inspiration from Doom's E3M6: Mt. Erebus, with its large lava lake and structures within it that open to reveal monsters.