E3M9: Man On The Edge is the ninth and secret map of episode 3 of Heretic Treasure Chest. It was designed by Walter Confalonieri (daimon) and uses the briefing theme from Descent as its music track. 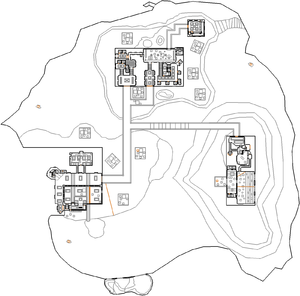 Map of Man On The Edge
Letters in italics refer to marked spots on the map. Sector, thing, and linedef numbers in boldface are secrets which count toward the end-of-level tally.

This level consists of three large buildings connected by bridges; you begin in the west building. Take the Ethereal Crossbow in front of you and follow the path north and east past some nitrogolems and nitrogolem ghosts to a large door and go through it to get outside; be aware of a southerly wind that can slow you down and send some projectiles off course. Follow the bridge due north past more nitrogolems and some undead warriors until you reach the yellow north building and open the door to enter a room with two staircases. Go down the right-hand staircase and press the switch at the bottom to open the neighboring door, kill the nitrogolems waiting on the other side then head north into a narrow passage and use the metal lift on your left to reach a chamber with some fire gargoyles. Go through the gray door to find another switch along with an Energy Orb and two Quartz Flasks, press it then ride the lift back down and follow the passage past some sabreclaws to a teleporter. This will return you to the west building, on a ledge holding the blue key.

Press the switch next to the key to raise a bridge then head east towards the large door again; as you walk over the orange steps you will see that two more doors have opened on your left. Go through either door to a storeroom and collect the Hellstaff and Greater Runes by the north wall, press the switch on the south wall then retrace your steps to the north building; just before you reach it you will arrive at a junction, where you can head east (a crate blocking the path lowered when you pressed the last switch) to find a door that requires the blue key. Open the door and push past the nitrogolems and undead warriors behind it, then go down the stairs and press the switch at the bottom to open a door leading to another storeroom with a raised walkway around it. Follow the walkway east until you see another staircase going up and follow it to a brightly-lit passage with fire gargoyles and follow it to the north-east corner, where a door leads to an ophidian guarding a switch.

Press the switch then go back downstairs and go to the east side of the storeroom, pass through a now-open door then go up the stairs to find an undead warrior ghost protecting another switch. Press this switch then go back downstairs and return to the staircase leading to the brightly-lit passage - a small door next to it has opened revealing the yellow key. Take the key then go to the north-east corner to find a switch which will lower the lift next to it; ride the lift up and follow the bridge past some weredragons (and an iron lich on bringest them oneth skill level or higher) to a door requiring the yellow key. Kill the monsters waiting behind the door then open a second door in the south-west corner to find an ophidian guarding a switch, which will lower a nearby platform. Ride the platform up and follow the path round to a switch which will open two walls behind you, revealing sabreclaws and nitrogolem ghosts guarding the green key.

Return to the bridge in the middle of the level and follow it east to the green eastern building, open the green key door at the end and kill any weredragons and undead warriors waiting behind it. Head south along a short wooden path to another door with some gargoyles and other monsters behind it, press the switch hidden in the north-west corner then return to the previous room and head down the staircase in the south-west corner to a green door guarded by two nitrogolems. Open the door and kill any nitrogolem ghosts waiting in the next room, then head north-east to a doorway and go through the door behind it to find Energy Orbs and Greater Runes. Head up the stairs to a large hall with crates (the passage will close behind you as you enter the hall) and walk south until you see enemies teleporting in around you, then quickly head through the open door in the west wall to reach an empty area. Head south to a small chamber holding two nitrogolems and an ophidian and press the switch inside it, then go to the north side of the area to find a second chamber with another switch that will open the large door in the west wall. Go through it and step on the teleporter to reach an outdoor area with crates, near the west building.

Head west until you walk over an orange step then climb up the gray steps ahead to find an ophidian in front of a door. Open the door and press the switch behind it which is guarded by nitrogolems, then go back outside and head east and north around the building until you reach an open door on your left. Walk past some fire gargoyles to the south-west corner of this room to find the exit door, kill the iron lich waiting behind it then press the switch it was guarding to finish the level.

There are three chambers in the north building that have several doors leading to small bedrooms.

* The vertex count without the effect of node building is 7526.