E3M9: Savage Area is the secret map of The Evil Unleashed. It was designed by Thomas Möller, then known as Grindcrusher.

This level can be accessed from E3M6: Dark Altar; completing it takes the player to E3M7: Infested Ruins. 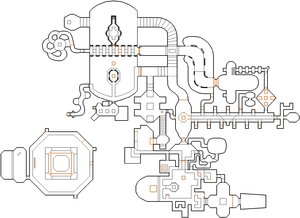 Map of Savage Area
Letters in italics refer to marked spots on the map. Sector numbers in boldface are secrets which count toward the end-of-level tally.

The door that leads to the exit does not require the yellow key despite appearing as though it does.

* The vertex count without the effect of node building is 1626.