E3M9: Slept Too Long is the ninth and secret map of Army of Darkness TC. It appears as MAP09 in the PWAD's Doom II conversion. It was designed by Lawton Roberts (DoubleBrrl) and uses the music track ? by Rick Sparks (Suture). It is accessed from E3M7, and warps back to it on completion. 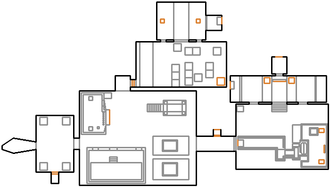 Map of Slept Too Long
Letters in italics refer to marked spots on the map. Sector numbers in boldface are secrets which count toward the end-of-level tally.

The concept is based on the movie's original ending that the parent studio Universal Pictures deemed "too depressing"[1] and ordered a reshoot for its theatrical release.

Andrew Stine (Linguica) suggested to the Army of Darkness TC team that its secret map should be set in a post-apocalyptic wasteland as found in the movie's alternate ending:

"We hadn't anything planned for the secret level. We had 8 levels planned now, in which one, the troublesome dungeon, didn't really fit the storyline. I believe [Stephen Angell (Shonen)] mentioned different movie endings to me before, but I never really thought about the idea of turning it into a secret level. Andy thought of it, and so we did it. Actually, Lawton Roberts did it. He is by far the fastest level builder in the team."
― Stefan Maes[2]