E3M9: The Aquifer is the secret level in The Dome of D'Sparil episode of Heretic, and can be accessed from E3M4: The Azure Fortress. It shares its music track with E2M6: The Labyrinth and E5M6: Colonnade.

Completing this level leads to E3M5: The Ophidian Lair. 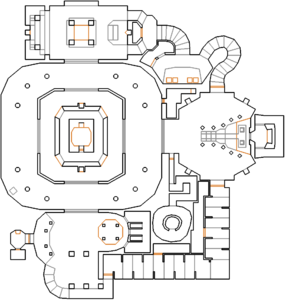 Map of The Aquifer
Letters in italics refer to marked spots on the map. Sector numbers in boldface are secrets which count toward the end-of-level tally.

Beyond the pillars to the right, pick up the Ethereal Crossbow. Go to the newly opened room and pick up the yellow key. Go up the stairs to the southwest and go through the yellow door. On the other side, there is a rough corridor making a ninety-degree turn north in the distance. Go to the end and open the wooden door.

If you need ammo for the Phoenix Rod or the weapon itself, past the green door, turn left to the window, then left again and you will see a door. Inside, you will find Flame Orbs and a Phoenix Rod. Go up the stairs with a carpet, pick up the Bag of Holding, and the door behind it will open, revealing the green key and some disciples. Pick up the key, and another hidden room will open containing Mace Spheres. Go through the green door. In the first room, there are four red pedestals. Continue your way downwards, until you reach a crossing. Enter the next hall.

Pick up the Hellstaff, but beware of the ceiling as it will fall down. After the area is clear, pick up the blue key and go through the portal (a disciple will attack as soon as you pick up the key). Now you are in the middle of the water area you have seen from the three previous halls. Proceed to the inner circle and locate the blue door. After entering the door, two iron liches (one on the two easiest skill levels) will attack you. Quell the opposition and use the portal to get to the next level - The Ophidian Lair.

If the Firemace has appeared at the level startup, you will find it at one of four different positions. In order of appearance, they are located

If the weapon did not appear, the next chance to get it is on E3M6.