E3M9: The Brother's Onslaught is the ninth and secret map of Curse of D'Sparil. It can be accessed from E3M4: The Herakleion or E3M4P: The Herakleion, depending on which level the player has been sent to.

It was designed by Karl Käll and uses the music track from Heretic's E2M6: The Labyrinth. 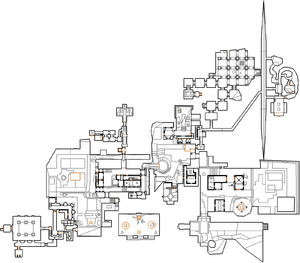 Map of The Brother's Onslaught
Letters in italics refer to marked spots on the map. Sector, thing, and linedef numbers in boldface are secrets which count toward the end-of-level tally.

Take the Ethereal Crossbow and Quivers of Ethereal Arrows in front of you, then cross the bridge and head north until you see a sandstone ledge on your right. Turn right here and head forward until you see some steps on the right, then climb these and turn left to see a wooden structure with hanging skulls. Approach the red teleport glitter inside the structure, and you will be sent to an area north of the start point. Kill the nitrogolems behind the wall ahead that has just lowered, then step over the wall and turn left to enter a new area guarded by several golem ghosts, along with three undead warriors to the south. Fire gargoyles will also attack from above on medium and hard skill levels.

Fight these monsters if you choose, then head north until you drop into a stream and follow it east to a set of bars which will open as you approach - the area behind the bars is dark, so consider lighting a Torch if you have one. Follow the water north until you pass three gargoyles and drop down a hole, then turn right and left to reach a sludge-filled area with Gauntlets of the Necromancer (the sludge has low friction so watch your movements in this area). Watching out for ambushes from sabreclaws, follow the archways north, east, north and north again to reach a pillared area then head west until you reach solid ground. Turn left to see a room with a deep hole containing several gargoyles, then carefully step round the hole (it is inescapable if you fall in without a Chaos Device) and look east to see a metal wall. Press use on it to lower it, then press the switch which is revealed.

Backtrack to the pillared area, looking at the walls on your left to see a set of stone steps. Climb the steps and follow the ledge here to another switch, which will open a barred doorway to the east. Drop into the sludge and head east until you find a set of steps leading down to the doorway. Go through the doorway and turn left to kill three approaching gargoyles, then head to the area they were guarding to find a tunnel leading into a small cavern. Follow the cavern south past some more gargoyles until you enter some more sludge, then turn left, right and right again to find a set of steps leading down to a switch. Press it and turn left to go back into the sludge, then turn left again and head south through a set of bars which have now opened.

You will enter a room with a red floor and two metal platforms. Run south across the platforms to the green wall, which will reveal a switch in front of you and a number of golem ghosts behind you. Kill these monsters then backtrack through the sludge to where you first entered the river and look west to see a curved staircase running round a stone tower. Climb the stairs to the top then follow the ledge west and turn left to go through a doorway. Kill the undead warrior ahead then turn right to kill three fire gargoyles, then head west until you reach a set of wooden steps going down (you will pass an opening in the wall on the right, which you will need to visit later). At the bottom, turn left and go through a door then climb another staircase to a dark area with fire gargoyles. Turn left to see a brightly-lit yellow key gizmo next to a switch, which you should press.

Backtrack down to the bottom of the curved staircase and head north across the river this time. On the west side of the building in front of you is a broken door - go through it and head east through a doorway to what looks like a ruined church. Slay the iron lich in an alcove in the east wall and take the Enchanted Shield it was guarding, then climb on to the pulpit by the north wall which will lower a lift in the south-east corner of the room. Go through the doorway hidden behind this lift before it rises again, then follow the passage round and go through a small doorway on your left to enter a small chamber. Take the yellow key sitting on the platform that lowers in front of you.

Head back across the river and go up the curved staircase again. At the top, head west along a stone ledge then turn left and right to return to an area where you previously killed three fire gargoyles. There is an opening in the wall on your right - go into this opening and open the silver skull door ahead which requires the yellow key. Go through and open the wood wall ahead, then walk through a stone chamber and turn left to go down a set of steps. At the bottom, fire any weapon to make a noise and cause some disciples of D'Sparil to teleport into the chamber on your right. Once they are dead, go through and slay the iron lich blocking your way then head through a passage with a blue floor to find a switch.

Press the switch then go back up the stairs to the stone room, where another switch has been revealed. Press it to lower another set of steps and go down them to a room with a red trident symbol on the floor, which is guarded by gargoyles, golems or sabreclaws depending on skill level. Press the small switch to lower the wall in front of you and reveal a disciple (an iron lich will also teleport in behind you on hard skill levels), then backtrack to the ruined church to find that another iron lich has been revealed, along with ophidians on medium and hard. Return to the passage where you found the yellow key to see that a second doorway has opened - go through it and take the green key as it lowers.

Return to the silver skull door that required the yellow key, then head south-west until you drop off a ledge and destroy any waiting sabreclaws. Head south through a metal tunnel then turn left and climb the stairs to a door next to a green key gizmo. Open the door and press the switch behind it, then go through the wall that lowers on your right and follow the path behind it. After going down some wooden steps, kill two nitrogolems that appear on medium and hard skill levels then head west on to a stone platform. Follow the platforms north and west (collecting a Hellstaff on the way) until you reach a ledge then follow this north and west past another green key gizmo to a wooden door.

Go through the door and down a set of stairs, kill any waiting undead warrior ghosts then go through the south door and follow the tunnel behind it to another door. Pass through this door and go down a steep staircase, then follow the passage west (the arrow on the floor points to more ammo) and down another staircase to the exit door, which will open as you approach and shut once you pass through it - you cannot go back after this point so make sure you have collected everything before passing through the door. Kill the fire gargoyles ahead then open the door in the west wall to reveal an iron lich on easy skill levels, or a maulotaur on medium or hard. Kill this monster then press the switch they were guarding to open the exit teleporter on your left, which leads to E3M5: The River of Ladon - if you want 100% kills, make sure to kill the six disciples that are released behind you before leaving.

The blue key is optional, but is needed to reach secret #4. After getting the green key and using it to get inside the exit building, you will encounter some undead warrior ghosts - kill them then follow the corridor east and south to a dead end. Look at the mosaic wall on your right to see that part of it is damaged, then open this wall to reveal another undead warrior guarding a switch next to a blue key gizmo. Press the switch then return to the ruined church - as you go through the broken door, turn right to see a lift which you can ride up to reach the key.

South of the silver skull door requiring the yellow key is a wooden door which requires the blue key to open. Go through it and head down the staircase, going through a doorway at the bottom. You will be teleported into an enclosed area with two metal lifts - kill the golem ghosts (plus sabreclaws on medium and hard skill levels) then press use on the east lift to lower it. Press the switch hidden on the east side of the platform, then lower the west lift and ride it up to find a Phoenix Rod. Taking the weapon will lower another teleporter by the south wall, letting you return to the main level.

After entering the exit building, go through the door in the south wall and head south down a tunnel to another door. Behind this door is a steep staircase, but instead of going down it press use on the panelled wall opposite the door to lower it and reveal a passage leading to a Shadowsphere. Open the panelled wall next to this pickup to reveal another passage and follow it to the end - a wall will open ahead to reveal a Mystic Urn and a Tome of Power. Step into the ice patch next to the tome to be teleported to an earlier part of the level.

Just before reaching the exit door, you will enter a tunnel with a south-pointing arrow on the floor. Follow the arrow and kill two ophidians in the passage, then follow it to find three alcoves containing an Inferno Orb, a Pile of Mace Spheres and Greater Runes. You can normally only take one item as the alcoves will be sealed when you step into them; however, it is possible to take the items without stepping over the walkover lines that cause the alcoves to seal with precise movements.