E3M9: Warrens is the secret map of Inferno in Doom and can be accessed from E3M6: Mt. Erebus. It is based on E3M1: Hell Keep, and is similar until the natural end of E3M1, at which point the player must retrace his steps. It was designed by Sandy Petersen and uses the music track "Hiding the Secrets". The par time is 2:15.

On entering the level, the player should become aware that the scenery is familiar. The map is identical to E3M1 until the player reaches the area which formed the exit of this map.

The player is suddenly confronted by a cyberdemon in place of the level exit. From this point onwards, sections of the map will have opened up to reveal new areas and more enemies. The player must retrace their steps to the beginning in order to find the true exit. 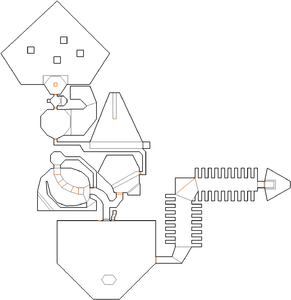 Map of Warrens
Letters in italics refer to marked spots on the map. Sector numbers in boldface are secrets which count toward the end-of-level tally.

Press the eye switch in order to activate the lift you are standing on. A door and two switches will appear. Press the switch on the left to open the door. Enter it, then turn left. Take the shotgun on the bridge to the left; you must be quick, because the bridge will descend into the surrounding pool of blood. Go through the fake wall in order to get out. In the red brick room, turn right and straight to a gargoyle panel. Open it. Now, back in the fork way, take the path east to a door. Open the door to get to the outside area. Open the wooden face door. Proceed along the narrow hallway killing demons to the end. At the end of the corridor, open another door. Enter a room with red pillars and a few items. Pick them up and enter the next door to a smaller room which is filled with imps. Enter the exit door and enter the fake exit teleporter.

Suddenly, the walls will descend and the cyberdemon will make a dramatic entrance. Hurry to collect the rocket launcher, the rockets for it and the invulnerability sphere. While invulnerable, battle the cyberdemon and after disposing of him, retrace back to the level's beginning. On the way of tracing back you will encounter various revealed areas that were closed before. All of them are optional to visit and contain monsters and powerups, including an invulnerability sphere. In the beginning area now, notice a path in the east that was also closed earlier. Go there and, suddenly, you will be brought inside standing behind the cacodemons. Once you make a noise, packs of shotgun guys will appear from alcoves. Also, the lights should turn off. Dispatch the enemies. After that, head east and collect the red key. A trap should open revealing one baron of Hell and three of them when you approach closer to a wall. Also, there are some collectibles in these freshly opened rooms. Now, return to the starting area and notice that the second skull switch which closed the door is out now. Instead, there is a panel substituting it. Press use on it and use the actual exit teleporter to finish the level.

Two "hanging leg" decorations (things 80 and 82) have no flags set for any of the difficulty classes, so they do not actually appear in the level.

It is possible to lock yourself out of the first room by pressing the button to lower the first door in the level and then quickly running through the door before it closes. This will prevent you from beating the level. This bug is also present on E3M1, but is much easier to perform on this level than on E3M1 because the ceiling of the sectors either side of the door on E3M9 are higher than they are on E3M1.

It is also possible to get stuck in the room with the red pillars by opening the blue door once you have the blue skull, closing it from the other side, opening it again and going back in the room, and letting it close on its own. At that point the blue door will now no longer respond and remain closed forever preventing you from finishing the level.

There are 2 uncategorized anomalies in this level's REJECT table.

The data was last verified in its entirety on November 20, 2012.

The official French name of this level is Clapiers.