E4M1: Cold and Stranded is the first map in episode The Plateau of Leng of Strange Aeons. It was designed by Mike MacDee (Impie) and uses the music track "Docks theme" from F.E.A.R.. 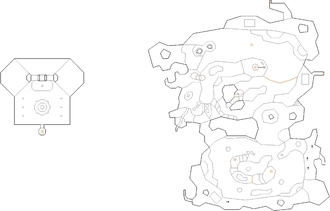 Map of Cold and Stranded
Letters in italics refer to marked spots on the map. Sector, thing, and linedef numbers in boldface are secrets which count toward the end-of-level tally.

You start where the last episode left off, standing over the corpse of the Spinner in Darkness. Head through the slipgate to enter the Plateau of Leng. You are immediately set upon by gunmen, and young Leng Spiders shortly afterward. Watch the houses on the cliffs above for snipers as you make your way through the valley to the upper levels. Grab the armor in the Grell pit by the waterfall and activate the slipgate at the tip of the peninsula: the first Leng Chieftain bursts out of it and begins gunning for you.

The slipgate spits you out onto a crescent-shaped plateau where Devils take potshots at you from nearby. Kill them, then grab the ammo and soul sphere on the ground below. Save the sphere for last, because it triggers a Leng Spider ambush and causes the plateau to partly collapse, making it more difficult to reach the exit. Kill the Grells that come out of the exit slipgate and jump through to escape.

On higher difficulty levels, the first group of Men from Leng is immediately set upon by a pack of hungry Leng Spiders, which will chase after you next.

The (absence of) data was last verified in its entirety on August 3, 2022.