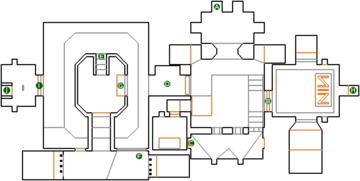 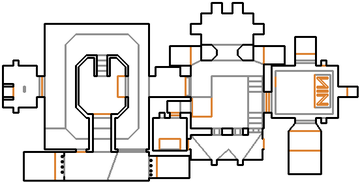 The red key can be picked up from the outside area by bumping the grate.

The "NIИ" logo is a reference to Nine Inch Nails, the American industrial rock band, of which American McGee was a fan. id Software's next game, Quake, would feature sound and music by the band's frontman, Trent Reznor, who was himself an id fan and friend of McGee and John Carmack.

This reference has been removed from the map twice, first in the PlayStation version of the map, and then again in the Unity-based versions of Doom Classic. The latter instance was due to concerns over use of the trademark.