E4M1: Nexus is the first map of episode Blood Stained Earth of No End In Sight. It was designed by Emil Brundage (NaturalTvventy). 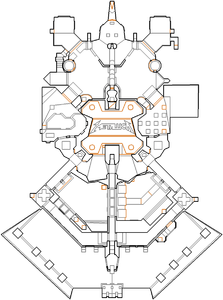 Map of Nexus
Letters in italics refer to marked spots on the map. Sector, thing, and linedef numbers in boldface are secrets which count toward the end-of-level tally.

Drop into the water and go outside then drop down a hole in the south-west corner and walk through the fire wall to an area with one or more barons of Hell. Head south-west into a teleporter which will send you to a passage at the south end of the level; head north until you reach a rocket launcher between two doorways. From here you can go left for the blue skull key or right for the red skull key, which can be collected in either order.

Go through the left doorway to an area with two switches; the button requires the blue key, but you can flip the knife switch to lower a lift leading to a room with two or three demons. Drop through either window to the water below, then go round to a dark opening in the north-east wall to drop down to a teleporter guarded by a cacodemon. Step on the teleporter to reach an enclosed area overlooked by more cacodemons, then go to the west wall to find the blue key. Watch out for some demons that are released behind you when you take the key, along with two barons that teleport in.

Go through the right doorway to an area with two switches; the button requires the red key, but you can flip the knife switch to lower a lift leading to a room with one or more demons. Step through the left-hand window to a tall pillar over a blood pit, then carefully step over some more pillars to a teleporter that will send you to a blood-filled area with one or two demons. Run east across a bridge to reach the red key; the bridge will drop away as you cross it, but if you fall off then a teleporter guarded by cacodemons will be revealed in the south-east corner that you can use to get to the key. With the key, drop into the blood and use the smaller teleporter in the north-west corner to return to the passage that held the rocket launcher.

With both keys, return to where you found the rocket launcher and go through the left doorway to press the button requiring the blue key, which will open a ceiling above the lift next to it. Ride the lift up and head south-west until you drop into another room, then use the teleporter here to enter a marble tower (you will telefrag a cacodemon when doing so). Flip the knife switch here to lower the floor then press the blue skull switch to raise a set of steps up to the exit door, then step through the doorway to drop to the water below and retrace your steps to the rocket launcher passage.

Go through the right doorway now and press the button requiring the red key to open a ceiling above the lift next to it, then ride the lift up and head south-east until you drop into another room, then use the teleporter here to enter another tower (again, telefragging a cacodemon in the process). Press the red skull switch to raise a bridge leading from the tower to a platform guarded by one to three barons, then head south up the water steps to the exit door. Press the skull switch behind the door to finish the level.

After going outside at the start of the level, some demons will emerge from an opening in the west wall. Go into the opening to find a chaingun.