E4M1: The Lost Bastion (Thy Flesh turned into a draft-excluder)

E4M1: The Lost Bastion is the first map of Thy Flesh turned into a draft-excluder. It was designed by Matt Powell (cannonball) and uses the music track "Sign of Evil," originally composed by Robert Prince for Doom. 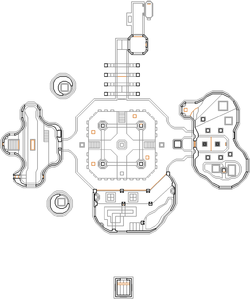 Map of The Lost Bastion
Letters in italics refer to marked spots on the map. Sector, thing, and linedef numbers in boldface are secrets which count toward the end-of-level tally.

This level pits you against a large number of enemies with relatively few weapons. Your focus should initially be on collecting ammo and provoking infighting, especially on Ultra-Violence (UV) and Nightmare (NM) skill levels where the shotgun will not be available at the start.

As soon as the level starts you will face a baron of Hell as well as some imps and lost souls; you will also see a shotgun in front of you on Hurt Me Plenty (HMP) or lower. Instead of fighting, push past the baron to a pillar holding the yellow skull key then head up the steps to your left or right to reach the surrounding ledge. Kill a nearby shotgun guy and take his weapon if you need it, then head through the west doorway and drop down to a wooden platform guarded by some zombies and a spectre; there is a blood trench in front of you containing two lost souls, or cacodemons on Ultra-Violence and Nightmare. Go to the south-east corner of the platform to find a lion switch and press it to raise a step in the middle of the trench, then step across to the other side and go up the steps in front of you to reach a skull switch.

Press the switch then go back outside, passing lost souls (or a cacodemon on UV and NM) that have been released near the doorway, and go down the steps to collect the yellow key which has now lowered. Head up the east steps and walk round the marble block in front of you to reach a yellow key door, go through and head straight forward to a skull switch that needs to be pressed; as you approach the switch, the floor will lower and drop you into a blood pit containing zombies and one or more spectres and cacodemons. Go to the wooden step on the south side of the pit to find a chaingun, press the skull switch on the nearby column to lower a metal lift then run to the north-west side of the room to catch this lift before it rises again. Kill the imps here then step into the teleporter to return to the starting point.

Head due north until you go up the steps, then continue north past a set of yellow skull bars which have now lowered. You will walk under some brick arches - as you walk under the third arch you will be ambushed by imps and demons that teleport in front of you and behind you. Continue to the end of the walkway and turn right to confront some lost souls (and a baron on HMP or higher) then press the gargoyle switch on the east wall to go down to a wooden dock. Enter the boat at the end of the dock and press the gargoyle switch inside it to finish the level.

A radiation shielding suit and a berserk pack can be found south of the start point - entering this area will cause some demons to rise from the nearby blood pool. If you head up the steps in this area you can also reach an armor and a partial invisibility.

* The vertex count without the effect of node building is 1993.