E4M1 is the first map of the fourth episode of Heroes. It was originally designed by Kevin Haley and Bill Courneya as TOWN.WAD (The whole city's gone to Hell!), then modified by Albert Dewey for the compilation. It uses the music track " ". 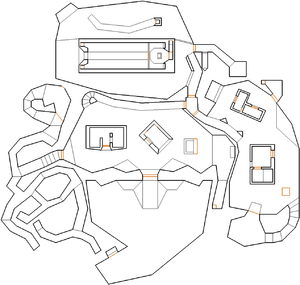 Map of E4M1
Letters in italics refer to marked spots on the map. Sector numbers in boldface are secrets which count toward the end-of-level tally.

As one secret (#6 above) is too small, the maximum achievable secret percentage on this level is 85%.

* The vertex count without the effect of node building is 472.