E4M1 is the bonus map of Sillouhettes of Phobos. It was designed by Michael Lundy. 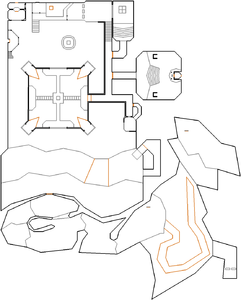 Map of E4M1
Letters in italics refer to marked spots on the map. Sector, thing, and linedef numbers in boldface are secrets which count toward the end-of-level tally.

Take the shotgun to your left, then head down the steps in front of you to an open area with demons, spectres and zombiemen. In the north-west corner is a red chamber containing a cacodemon - shoot the satyr switch behind it to reveal a second switch, and also lower a wall in one corner of this chamber that will allow you to reach that switch. Flip the switch then walk south to a wooden platform; stairs have risen by the south wall, allowing you to get on top of the platform and find one or two spectres protecting a gargoyle switch. After pressing this switch, head south until you get to the edge of a lava pit, turn left to confront some shotgun guys and a baron of Hell then go forward until you see a wooden bridge on your right that you can cross.

Kill any spectres waiting on the other side of the bridge then proceed west to a wooden door, which leads to a large white cavern - follow the cavern west, south and east past some lost souls (and a baron on Hurt Me Plenty (HMP) skill level or higher) until you reach another lava pit, then press another gargoyle switch by the north wall to raise a curving bridge from the pit. Follow the bridge to a ledge on the north side of the pit and press a lion switch guarded by some imps (there is a chainsaw hidden behind the switch if you want it), then go back to the starting point and proceed east over a wooden bridge to a caged area - some metal barriers here have lowered, allowing you to go down a staircase blocked by imps to a hallway with several zombiemen. Take the chaingun at the junction, then walk west to a lift and activate it to get up to a cross-shaped walkway - the yellow skull key is in the center, guarded by zombiemen, shotgun guys, imps and a cacodemon.

With the yellow key, ride the lift back down and head north at the junction then open the yellow key door on your right to confront a baron on HMP, as well as two cacodemons on Ultra-Violence and Nightmare. Go up the steps and slay two shotgun guys waiting to your left and right, then open the exit door ahead to find a demon protecting the exit button.

Drop off the bridge next to the starting point to find a rocket launcher and several rockets.

In the white cavern on the south side of the level, a berserk pack can be found in a niche next to the window with the health bonuses.

After pressing the lion switch, step off the south-east corner of the nearby curving bridge to find that two metal barriers have opened, revealing a supercharge.