E4M2: Blockhouse is the second level in The Ossuary episode of Heretic Shadow of the Serpent Riders. It shares its music track with E1M2: The Dungeons and E3M6: The Halls of Fear. 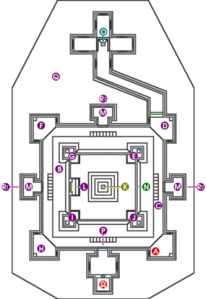 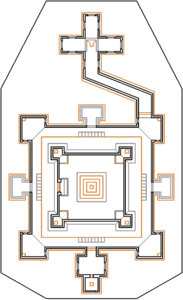 Map of Blockhouse
Letters in italics refer to marked spots on the map. Sector, thing, and linedef numbers in boldface are secrets which count toward the end-of-level tally.

The level is made distinctive by a fortress that is surrounded by a lake of sludge. Inside the outer layer of walls, there is yet another building that is protected by a moat of water. (B) Between the outer walls and the moat, there is a glowing tan-colored platform that goes around the inner building. (C) At each corner, there is yet an area that extends from the sides of the fortress.

You start at the southeastern extension of the platform (A). There are three types of enemies, each guarding a separate location: gargoyles lurk at the three other extensions, sabreclaws patrol on the bottom of the moat and ophidians are ready to fire at you from an encircling platform on the other side of the moat. (N)

When you drop into the moat at any possible location, a teleporter will become accessible at the northeastern extension. (D) Enter the device and you will end up inside the inner building.

Consistently with the place you were transported from, you stand on a high ledge at the northeast corner of a square-shaped zone. (E) Each corner has a similar ledge. In the middle of the water below, there is a plinth and a pyramid with the yellow key on its top. (K)

The idea is simple: each time you leave a new ledge by dropping into the water, a step of the pyramid will descend. When the fourth exit has been done, the key will finally come down. Thus, grab the Ethereal Crossbow and the Silver Shield and jump away. You can fight the existing sabreclaws and ophidians effectively by using timebombs that are found on all four ledges. Alternatively, you can fool the monsters to fight each other. When you approach the pyramid, an elevator will descend allowing you to return to the ledge. Use the teleporter to go back to the other side of the wall.

Now, enter the northwestern extension of the tan platform (F). When you use the exposed teleporter, you will end up onto the consistent ledge inside the inner building. (G) Take the Dragon Claw and the Tome of Power and repeat the last actions of the previous paragraph.

The teleporter at the southwestern extension will descend next. (H) Have the Hellstaff and the Morph Ovum and go on. (I)

Finally, the teleporter at the southeastern extension will open. (A) Pick up the Phoenix Rod and the Mystic Urn (J) and wait for the yellow key to become available. At the moment of collecting, yet a fifth elevator will descend. (L) It allows you to reach the yellow door.

Travel up and enter the door to find yourself on the narrow platform between the moat and the inner building. When you enter the door, the banner walls in the middle of the western, northern and eastern sides of the fortress will descend revealing disciples at their guard posts. (M) Go all the way to the other side of the encircling platform to find the green key. (N)

The green door can be found at the northeastern extension. (D) It will reveal a curvy passage with an iron lich opposition on the medium skill level or a higher one. The blue key is at the other end. (O) Collecting the key will open doors for more iron liches (or a maulotaur on the two highest levels), but notice that you can escape freely. It will take a long time for the monsters to enter the main area, given that they make it past the blue key area or the curves en route.

Return to the tan platform and proceed to the southern wall of the fortress where the blue door is located. (P) Open it to be greeted by a maulotaur. If you do not want to fight, you can lure the monster into the moat to make him less dangerous. He does not need a staircase but will simply drop himself from the edge once it comes in front.

Enter the exit door, hit the switch in the southern wall and move onto the revealed exit teleporter. (Ω)

* The vertex count without the effect of node building is 623.