E4M2: Corrupted Sewers is the second map in the fourth episode of Doom: Damnation. It was designed by Ofisil and uses the music track "Seven Plagues". The par time defined in the DEHACKED lump is 1:10. 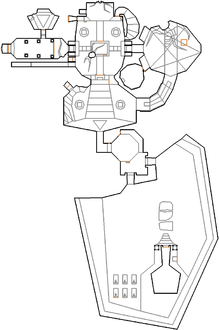 Map of Corrupted Sewers
Letters in italics refer to marked spots on the map. Sector, thing, and linedef numbers in boldface are secrets which count toward the end-of-level tally.

Take the shotgun in front of you then turn left to see an imp in front of a switch, which will raise a bridge over the nukage. Cross the bridge (which will open alcoves to your left and right containing more imps) and flip another switch on the central platform, which will raise a second bridge leading to the south doorway. Go through the doorway and immediately turn left to find a switch that will raise a staircase, climb the steps and kill a baron of Hell that teleports in at the top, then head south into a passage leading to a platform with health bonuses and a chaingun guarded by one or two cacodemons. Flip the switch in the north-west corner to raise the platform up to a ledge with demons, then flip another switch in the south-west corner to raise the platform to the top floor where there are doorways with one or two barons of Hell behind them. Go through either doorway then head south past some imps to a wooden building, climb the steps and use the door at the top to finish the level and move on to E4M3: Secret Chapel.

After getting outside to the area with the exit building, head south through some large trees to find some graves. Look at the back side of the gravestone in the south-west corner to see that it has white streaks, press use on this side then quickly go round to the east side of the exit building where a white teleporter has lowered. Step on the teleporter before it rises to move on to E4M9: The Canyon.

After crossing the first bridge from the start, head east into a room with a nukage trench then walk across the flesh growth to find a rocket launcher.

* The vertex count without the effect of node building is 984.