E4M2: Ice Melt is the second map in the Bonus episode of REKKR. It was designed by Matthew Little (Revae) and uses the music track "". 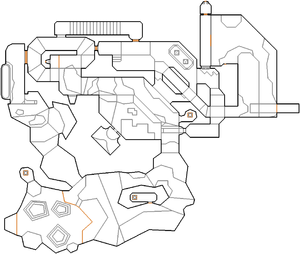 Map of Ice Melt
Letters in italics refer to marked spots on the map. Sector, thing, and linedef numbers in boldface are secrets which count toward the end-of-level tally.

In the southwest section, there is a glacier where the red key is found. Instead of jumping down to it, go to the southeasternmost part and look to the north. You will see darker ice in the ice wall: hit it to open it, revealing the secret exit.