E4M2: Parallels is the second map of episode Blood Stained Earth of No End In Sight. It was designed by Emil Brundage (NaturalTvventy). 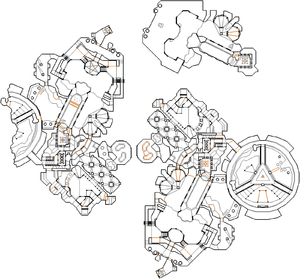 Map of Parallels
Letters in italics refer to marked spots on the map. Sector, thing, and linedef numbers in boldface are secrets which count toward the end-of-level tally.

This level includes multiple versions of the same layout: You start on the eastern side, in an area resembling a techbase. To the west, this layout is duplicated, rotated 180 degrees, and partially transformed by Hell. This narrative terms these the "normal side" (east) and "Hell side" (west). Triggering actions on one side (opening doors, raising platforms, etc.) will often do the same action on the counterpart side. Both sides must be traversed to reach the exit.

Take the shotgun on the other side of the green column in front of you, then head north through the door. Follow the blue passage until you drop into a tan area. Head around and east to a circular hallway. Three tunnels filled with nukage lead to the center of the circle. Follow one to find an area with three walls making a triangle. In the middle is a column with three buttons.

One possible approach is to press the south and north-west buttons. Take the rad suit from the southern wedge. Double back to the north-east wedge, and jump to the ledge jutting out from the center. Clear out the imps standing on the round pillars, then climb them to reach the platform with the key, then exit through the outside wall. Alternatively, press all three buttons, take the same rad suit, but then use the stairs to exit to the circle. Proceed around the outside to the north-west wedge, and come in from the back to get the blue key.

Trip to the Hell side[edit]

Take the doorway leading east from the circle, to another nukage pool. Take the stairs up, and through the southern door to a metal room. Follow the far passage out and south-west until you reach a room with four red columns. Go through the blue door, then flip the right-hand switch to lower a platform across and below, revealing a wide hall behind it. Drop down and follow the hall north-east to a computer room. Flip the switch in the corner to reveal a teleporter which will send you to a "parallel" version of this layout -- the "Hell side", which appears on the west of the automap.

Step off the teleporter and head north down the wide hall, where several imps and some cacodemons await. You will see a lit arrow on the floor, pointing at the west wall nearest to the teleporter chamber. Press this wall to lower a lift, and ride it up. Turn left and head down some steps to a ledge overlooking a damaging blood pool. Drop down and run north to the staircase, climb it, then turn east and take a radiation suit.

Drop into the blood again and run south-west into an area with lava (mirroring the circle). Go south until you find a fiery tunnel leading to a wooden staircase. Instead of climbing that staircase, turn left/north, and find another staircase with armor bonuses. Climb it to an area with green platforms. Head east and north to find a skull switch. Press the switch to open the wall to the ledge above the teleporter chamber, and four yellow skull keys. Grab the keys, then step on the teleporter to return to the "normal side" (east) of the map.

On the normal side, head south through the wide hall to get back outside, then head north-west to the doorway. Take the stairs up and around to the south. Continue until you get to the lift across the hall that automatically lowers as you approach it. Take the lift up to the area with the red columns. Open the exit door using the yellow key, and press the switch behind it to move on to E4M3: Square Zero.

From the exit door on the normal side, head north-west, then follow the passage, run-jumping over a large gap in the floor to find a chaingun. On the Hell side, you will find a rocket launcher in the same place.

The blue door on the Hell side reveals a supercharge, but taking it will cause a number of monsters to teleport in. In the adjacent lower-level passages, you can find partial invisibility and a berserk pack in the dead ends.

To the north of the starting point is a curved walkway with a blue floor, with notches cut in it. On the Hell side, its counterpart is brown, and drops down when you cross it. Press the skull switch on the north side of the brown walkway to open a marble wall to the east. Go through to find a dark room with a plasma gun. If you then visit the same room on the normal side, you will find two energy cell packs and two boxes of rockets, but approaching the items releases a large number of monsters into the area.

* The vertex count without the effect of node building is 6454.