E4M2: Perfect Hatred is the second map of Thy Flesh Consumed in Doom. It was designed by John Romero and uses the music track "Donna to the Rescue." In the Doom Classic port, it has a par time of 4:15. It features a secret exit to E4M9: Fear.

Its open yet compact design means that the player will immediately alert and face a mass of monsters at the start, particularly a concentration of imps and cacodemons, without much cover and in very close quarters. Also, as much of the level consists of platforms above damaging lava, some skill is needed in making the "jumps", often while dodging enemy attacks.

The Sony PlayStation and Sega Saturn versions of Doom lack the exit to the secret level, Fear, as they do not include that map.

The map title comes from Psalm 139:22: "I hate them with perfect hatred; I account them mine enemies." 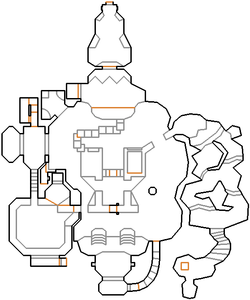 If starting ammo and health are not enough, you can fall into the slime and look for the supercharger and pick up the shell ammo in the tunnel back to the start. Mind the cacodemon waiting down in the slime right in front of the starting area.

The circular lava room in the southwest corner of the map has a platform which contains a plasma rifle - but when the player tries to grab it, barons of Hell emerge from hidden walls directly ahead of and behind the player. The eastern edge of the southern trap has a hidden switch which raises some of the wooden structure in the centre of the level, giving the player more room to move around.

The teleporter from the barons' room in the west has a secret next to it that leads to the other side of the teleporter, which leads to the north-west niche containing a megaarmor and other items. From there, you can normally jump back on the platforms in the center, or if you coordinate your jump properly, you can reach the stairs beyond the blue column.

From the same megaarmor niche, you can use the grab trick: run as fast as you can (helped by strafing at the same time) in the direction of the cyberdemon niche. If you go in the correct direction and coordinate the run properly, you'll be able to grab the BFG behind the wall, early.

The cyberdemon can be defeated by telefragging. As soon as you reach the sky-lit top area, a teleporter on the central platforms opens, which will bring you right on top of the monster, killing it. From there, you will be able to access the secret level, E4M9.

It is possible to bypass any use of the keys by straferunning to the right of the blue pillar from the room with the megaarmor. This trick was first performed by Steffen Winterfeldt, and is therefore now known as "The Steffen Winterfeldt Jump".