E4M3: Ambulatory is the third level in The Ossuary episode of Heretic Shadow of the Serpent Riders. It shares its music track with E1M3: The Gatehouse and E3M5: The Ophidian Lair. 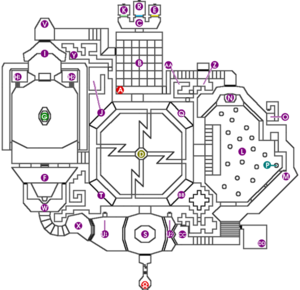 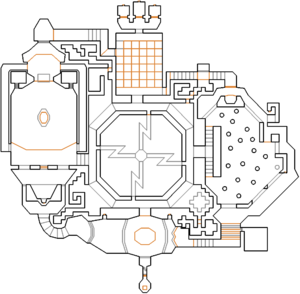 Map of Ambulatory
Letters in italics refer to marked spots on the map. Sector, thing, and linedef numbers in boldface are secrets which count toward the end-of-level tally.

You start at the southwest corner of a metallic hall (A), with doorways leading out on both the northern and southern side. Although your first objective is located to the south, the northern side holds an Ethereal Crossbow, so you may want to visit there. (C)

A large square-shaped zone in the middle of the hall is brighter than the surrounding edges. (B) The bright zone actually consists of 36 (6 x 6) individual sections, many of which have a trap set. When you step onto a section, its ceiling will start to operate as a fast crusher. The behavior applies to 21 cases. However, the remaining fifteen sections in the grid form a contiguous route from an edge to another and have static ceilings. You are able to spot the way with the help of two clues:

Enter the doorway to a wooden corridor that has the crossbow and each locked door. (C) Return to the southern side of the metallic hall and leave the area. A few steps away, there is a passage that actually is a part of an octagonal circle. In the beginning, its other sides are inaccessible, but the more you make progress, the more of it will be revealed.

Proceed to the opening in the passage to see a great outdoor crater with the yellow key in its center. (D) To reach the platform on which the key spins, simply move forward, and you will find out to be on a rising bridge. It will work as the route between the key and the opening you came from. Notice that if you fall into the lava, you can only survive by using the Wings of Wrath or a Chaos Device.

The progress is as follows: each locked door at the north conceals a room with a switch. When you press one, a new bridge will rise at the crater giving you an access to an unexplored area. Now that you have the yellow key, go to unlock the relevant door and press the switch. (E) It will raise the western bridge.

After crossing the bridge westbound, you will first arrive at an identical part of the circle. Further away, there is an indoor area with a pool of sludge to the north. On the bottom, there is an aggregate of pods, while in the middle, there is the green key on an unreachable platform. (G) It is important to know that you may not drop yourself into the pool at the point of the level, since there is no way to escape. What you need to do, instead, is to open the wooden door and examine the storeroom beyond. (F) When you press the switch there, the green key will come down, and it becomes safer to enter the sludge pool.

The northwest and northeast corners of the pool have ladder-like stairs that both lead to a disciple's chamber. The place beyond the former corner holds a Morph Ovum (H1) while the other has a Shadowsphere. (H2) When you grab the key in the center, an elevator at the northern end of the pool will descend, allowing you to exit. Once you have traveled up, you will be confronted by three iron liches. (I) However, passages begin to both your left and right, and you can use either one to flee if it is necessary. The passages lead back to the southern ledge of the sludge pool.

When you return towards the crater, you can notice that the northwestern side of the octagonal circle has been opened. Outside the circle, there is an orthogonal room made of stone. The area at the end contains a Bag of Holding. (J) Proceed to the metallic hall and press the switch behind the green door (K) to raise the eastern bridge.

Once you have passed the portion of the circle, you will come to a fork where there are two downward staircases. They both lead to a big flooded cavern with moss-covered walls. (L) Solid wooden pillars are scattered all over the area, but the easternmost one is broken midway and has the blue key in the gap. (P) As you walk northbound from the key, you can see a doorway leading out from the cavern. By stepping in, you will make six windows in the cavern walls go down and allow nitrogolems to enter the area.

Behind the windows, there is an unbroken corridor that circles around the water cavern. The southern end has a Hellstaff while the opposite end holds a Torch. You need to trigger three actions in the corridor in order to proceed:

Have the key and return to the border of the crater area. The northeastern side of the octagonal circle can be accessed now. (Q) A few golems have become freed in another orthogonal room. Make your last visit to the key doors and press the third switch (R) to raise the remaining bridge.

Go to the circular green hall. Although there is a Phoenix Rod in its center (S), do not take the weapon but return to the octagonal circle. The southwestern and southeastern sides of it have finally descended (T & BB), rendering the circle complete. On the sides, there are yet two more orthogonal areas. The southwestern one hides the Wings of Wrath and two Quartz Flasks. (T)

When you grab the Phoenix Rod, three doors will open uncovering new areas. The room to the east is a small one and has two disciples. However, the opposite room is not only bigger but also has a mightier opposition: in addition to the numerous disciples, there is a maulotaur that is able to harm you from behind a window. (X) Your last effort is to press a switch in both rooms (U1 & U2). The switches are located in alcoves and will raise the bars in front of the exit door, hidden as well until you took the rod. Enter the aforementioned door and walk onto the exit teleporter. (Ω)

E4M3 is the first level in the episode where a Firemace can be obtained. If it has appeared at the level startup, you will find it from one of five different positions. In order of appearance, they are located

If the weapon did not appear, the next chance to find it is on the following level.