E4M3: Sever the Wicked is the third map of Thy Flesh Consumed in Doom. It was designed by Shawn Green, and was his first Doom level. It uses the music track "Deep into the Code." In the Doom Classic port, it has a par time of 2:15.

The map title comes from Matthew 13:49: "So shall it be at the end of the world: the angels shall come forth, and sever the wicked from among the just." 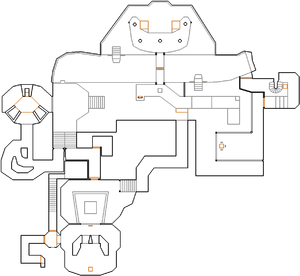 Map of Sever the Wicked
Letters in italics refer to marked spots on the map. Sector, thing, and linedef numbers in boldface are secrets which count toward the end-of-level tally.

This level has two keys: red and blue ones. You can get each key at any order.

In the starting area, you can notice a skull switch to your left. Press it to build the bridge leading to the east. Walk on this bridge to get to the other side of the wooden platform. Get ammunitons here and take the invulnerability sphere. While you are protected, head to the west of this area to the staircase leading down. To your right is a window leading to the lift. To the left are two staircases. To get the red key you can do the following now:

1) Head into the window or go on the staircase to your left that leads down. Clean up this room to safely return here. Use the lift in this room. There are three alcoves at the bottom when you lower the lift. Use the one to the north that has a teleporter inside. Head to this teleporter. In the next room, take any walkway in the west or east. Press the switch located before the lava pit. The platform will lower. The red key is right on this platform. Get it and backtrack to the teleporter.

2) Instead of dropping into the window, take the staircase leading up. Slay the shotgun guys here and head into the door. In the next room you can see the platform with the red skull key upon. Drop into the pit. Quickly get out of the lava. Press the lion switch to lower the platform. Get the key and head to the teleporter in the south of this room. This will bring you to the western lift room, however it is full of monsters now.

For that reason the first clause offers a safer way of getting the key while the second should be completed when you are protected with invulnerability.

Backtrack to the starting place. In case you have got the red key: 1) Use the lift to get to the wooden platform on which you start the level. Open the red bars to enter the blue key room.

Otherwise, if you do not have the red key yet: 2) Drop down into the western lava pool and press any lion switch to lower the lift. Head to the north here and you will notice two lifts here. Use any one to get into the blue key room. Grab the key.

With all the keys collected, drop down into the eastern lava pool in the starting area. Open the wooden door requiring the red key in the southeast of the pool. Rise on the stairs and open the blue door at the top. Head left into the room and enter the exit teleporter.

Behind the starting position is a bridge (sector 95) that can be raised for an invulnerability sphere and ammo. The bridge's southern and northern sides (linedefs 364 and 365) as well as a nearby line (808) have been tagged to the sector, but have no action attached to them. Instead, the player presses the switch in front of the start to raise the bridge sector.

The lava pit (sector 117) that surrounds the red skull key platform has many lurking imps. One of them (Thing 69, present on skill levels 4 and 5) is stuck in a wall.

A plasma gun (Thing 25) has no flags set for any of the three difficulty classes, so it does not actually appear in the level. The four player starts (Things 1, 2, 3 and 24) also have no flags, but because of special handling in the engine, they function normally in the level.

In the north-east of the map a rocket (Thing 232) is located outside the map's boundaries.

Linedef 46 does not lower the north-east lift of the map as it uses an erroneous one-time floor raise action triggered by gun shots. However, activating this line does not cause any ill-effects on the map.

As mentioned above, two secrets are located inside two torches preventing 100% secret collection without noclip.