E4M3: Square Zero is the third map of episode Blood Stained Earth of No End In Sight. It was designed by Xaser. 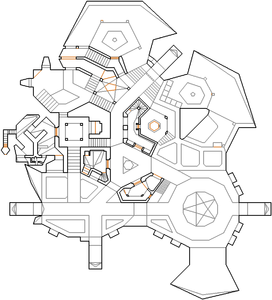 Map of Square Zero
Letters in italics refer to marked spots on the map. Sector, thing, and linedef numbers in boldface are secrets which count toward the end-of-level tally.

Head straight forward to collect a shotgun sitting on a triangular step then head north to an area with three locked doors around a structure with pillars. Continue heading north until you see a staircase on your left going north-west and climb it, then look right to see a chaingun and some lost souls next to another staircase. Climb this staircase and follow the passage at the top to the red skull key.

Return to the area with three locked doors and go through the red (south-east) door then turn right to see a switch behind two lost souls. Flip the switch then return to the bottom of the staircase that led to the red key; look north-east to see that a set of red skull bars have lowered allowing you to reach two more staircases. Climb the east staircase and follow the path to another set of steps - when you reach the top, turn round to see a ledge with armor bonuses and follow it north until you drop into a pit with a spectre. Press the button on the east wall to lower a pillar in the pool of water here, letting you reach the blue skull key.

Kill the monsters that teleport on to the stairs leading out of the pit, then go back to the area with three locked doors and head through the blue (north) door. Follow the passage until you find a switch near a baron of Hell, flip the switch to raise a set of steps and follow them up to an exit door, go through and step on the patch of sky to finish the level.

After collecting the yellow skull key from secret #1, go to the area with three locked doors and head through the yellow (west) door. Flip the switch in this room to reveal a teleporter behind you, then step into it to be sent to the south-east corner of the level where a column has lowered to reveal a cyberdemon guarding a plasma gun.

After taking the red key, go down the steps leading to it and head south-west to find another red door leading to a wooden room. There is a staircase on the west side of this room leading to an exit door, but when you press the switch behind it the lights will darken and you will have to fight your way out.