E4M4: Sepulcher is the fourth level in The Ossuary episode of Heretic Shadow of the Serpent Riders. It contains an entrance to the secret level E4M9: Mausoleum. 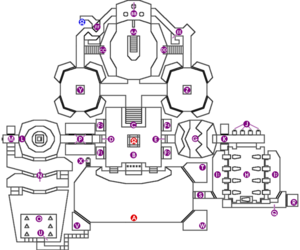 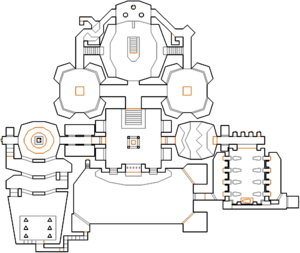 Map of Sepulcher
Letters in italics refer to marked spots on the map. Sector numbers in boldface are secrets which count toward the end-of-level tally.

The level is unique in its non-linear progression. While the vast majority of the levels follow the formula of finding keys in a regular order (yellow, green, blue), E4M4 is devoid of keys. In this specific level, you need to visit two sections of the building. The areas hide triggers of which combined effect will open the exit teleporter in the center hall. You can choose the order for the quests.

The map is also notable for having a lot of optional areas. The third section of the building is the biggest but going there is only necessary if you aim to get a 100% outcome or reach the secret level.

You start in the courtyard of the building. (A) Once you have entered through the gateway in the distance, you cannot return the same way. Since you will not find much ammunition in the beginning, you might want to explore the courtyard, corner by corner, to find timebombs. When you are ready, walk near the barred entrance, and the bars will rocket open temporarily.

The center hall of the building (B) has gray doors leading to both the west and east. To the north, there is a high ledge with a detailed back wall. (C) Have the Dragon Claw, search the hall for other items and clear as much opposition as your ammunition allows.

You may now choose which section to visit first. Walk near a gray door to open it for a few seconds. Whether you take the eastern or the western door, 16 golem ghosts will become freed in four chambers (F1-F4) when you cross a side of a door. (D or E) The monsters are unable to open the gray doors, but the doors will open whenever you walk to their proximity. You can fight the golems with your timebombs as their chambers contain a Torch (F1), a Chaos Device (F2), an Inferno Orb (F3) and a Bag of Holding. (F4) If the items are not worth the lost weaponry, you can let the monsters be behind the closed doors and face them later with a better equipment.

If you have started from a pistol start, it is recommendable to choose the eastern section first. While it is the longer of the two, the area has an Ethereal Crossbow and a considerable amount of arrows, which would subsequently help in the western section. The mandatory part of the western side is short but has many undead warriors and no ammunition. Going there first would cause problems when later facing the golems in the center hall and the monsters on the opposite side.

Behind the door (E), there is a circular room with four steps in it. (G) Destroy the gargoyles and walk onto the platform on the top. It will descend and reveal a corridor to the sepulcher. (H) It is a decorative hall with nine coffins. At the southern end, two undead warriors can shoot you from behind a couple of windows. Gather the arrows and finally take the Ethereal Crossbow that stands on the odd coffin. The red walls next to the eight other coffins will open allowing nitrogolems to access the hall. When you enter either of the exposed rooms (I1 or I2), you will lower the exit teleporter back in the center hall. It is reasonable to kill the golems as the escape from the area will take some time.

Return to the northern end of the sepulcher where an alcove with a switch has been opened. (J) When you press the switch, a new one will become revealed next to the previous. Continue until you have pressed four switches. Each time you activate one, a step in the circular room (G) will also descend slowly. When all four are down, you can return to the center hall. Notice, however, that pressing the last switch will open doors for three disciples to attack. (K)

The door (D) covers a long corridor that ends to a circular room. Beware the nitrogolems that can fire you through windows from the south. (N) In the middle, there is an elevated platform with many undead warriors. When you hit the eagle insignia on the western side of it (L), the platform will come down. By crossing the descended platform at any other point than its western side, you will yet lower the inner section. The uncovered switch will open the doors around the exit teleporter. Thus, if you already have done the right actions in the eastern section, you can return to the center hall and step onto the exit. (red Ω)

If you decide to go on instead, press the switch in the freshly accessed area. (M) The action will open the route to the winding corridor where the nitrogolems could shoot at you. (N) Note that when you have reached the bottom of the first steps, a room with gargoyles will become revealed in the direction you came from. (M) In addition, four walls (P) near the gray door will open freeing more nitrogolems. While they can enter the circular room, it is difficult for them to fire far away from their location. Hence, you can deal with them only when you return.

Once you reach the southern end of the corridor, you will arrive at a hall with an ornamental platform. (O) The area below the structure holds a Tome of Power, a Quiver of Ethereal Arrows and an Energy Orb. There is a staircase at the southern wall allowing you to reach the platform. Collect the Dragon Claw and the six timebombs on the structure. You can now backtrack to the center hall. Kill or pass the remaining nitrogolems in the circular room. Their chambers (P) have four units of Ethereal Arrows and two Quartz Flasks for you to collect.

In order to reach the secret level, you must find secrets 2-6.

If the Firemace has appeared at the level startup, you will find it from one of five different positions. In order of appearance, they are located

If the weapon did not appear, the next chance to obtain it is either on E4M9 or E4M5.