E4M4: Unruly Evil is the fourth map of Thy Flesh Consumed in Doom. It was designed by American McGee and uses the music track "Suspense". In the Doom Classic port, it has a par time of 2:30.

In the Sony PlayStation and Sega Saturn versions of Doom, finishing this level takes the player directly to E4M8: Unto the Cruel. This is due to the ports lacking the maps They Will Repent, Against Thee Wickedly and And Hell Followed.

The map title comes from James 3:8: "But the tongue can no man tame; it is an unruly evil, full of deadly poison." 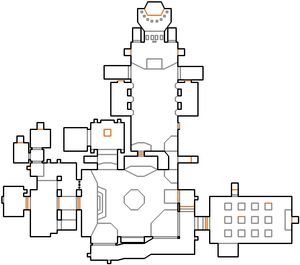 Map of Unruly Evil
Letters in italics refer to marked spots on the map. Sector numbers in boldface are secrets which count toward the end-of-level tally.

In the initial room, head into the door. In the next room, get the shotgun, use the lift and enter the door to get outside. Here, you can see three lava pits in the southwest, southeast and northeast. Drop into southeastern one. Turn left and get many health bonuses. Use the lift to get out of here. A wall in the northwest is open now, head there. Get the red skull key. Several traps will open.

In the outside area, open the wooden door requiring the red key in the northeast. In the next area, you need to lower all the metallic bars that block your way to the exit. Press the gargoyle switch to lower the lift. Rise on the lift. Use any teleporter to your left or to your right. They will bring you into the closets with several shotgun guys. Kill them and press gargoyle switch to lower the bars. Now, repeat by entering the second teleporter. When all the bars are lowered now, head into the sky exit toward north.

In the same room, on Hey, Not Too Rough difficulty or lower, the spectres in each of the northern compartments occupy both the inner and door sectors, preventing the compartments from opening when the switches are flipped unless the player shoots at the doors with the rocket launcher. The rockets will punch through the doors and kill the spectres with enough blasts. Upon killing them, the doors will open like normal when the switches are flipped.

Also in this room, on Ultra-Violence difficulty or higher, the cacodemon pairs in the northern compartments are each glued together, and will not move until one of them is killed.

Along the south side of the center yard, there is a pen containing three demons that can be killed through the closed entrance of the pen with any projectile weapon such as the rocket launcher. Hitscan attacks cannot be used before the wall blocking the entrance has begun to lower. If using a source port with the ability to look up and down, one can also kill the demons with any projectile attack by firing at the wall behind the back side of the pen. These can happen because the monsters are actually too big for the pen and their hit boxes expand both outside the entrance and into the back wall of the pen. Mysteriously, the entrance is still able to lower and the demons are capable of moving once the lowering has taken place.

The four player starts (Things 0, 1, 2 and 3) have no flags set for any of the three difficulty classes, but because of special handling in the engine, they function normally in the level.