E4M5: Doctrines of Devils (Ultimate Doom the Way id Did)

E4M5: Doctrines of Devils is the fifth map of Ultimate Doom the Way id Did. It was designed by Gifty. The par time defined in the DEHACKED lump is 3:45. 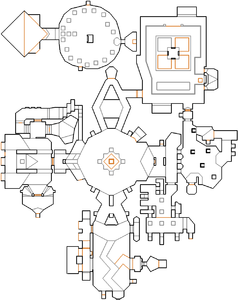 Map of Doctrines of Devils
Letters in italics refer to marked spots on the map. Sector, thing, and linedef numbers in boldface are secrets which count toward the end-of-level tally.

A demon (Thing 377) in the easternmost room has no flags set for any of the three difficulty classes, so it does not actually appear in the level. It is at the same spot as a spectre on skills 4-5, so probably was intended to appear on skills 1-3.

* The vertex count without the effect of node building is 1103.

1 Timothy 4:1 “Now the Spirit speaketh expressly, that in the latter times some shall depart from the faith, giving heed to seducing spirits, and doctrines of devils.”