E4M5: Gore Nest is the fifth map in the fourth episode of Doom: Damnation. It was designed by Ofisil and uses the music track "Anxiety". The par time defined in the DEHACKED lump is 1:50. 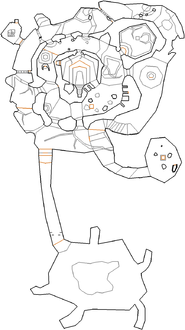 Map of Gore Nest
Letters in italics refer to marked spots on the map. Sector, thing, and linedef numbers in boldface are secrets which count toward the end-of-level tally.

Take the rocket launcher in front of you then head forward to a cacodemon sitting on top of a backpack. Turn left after collecting the backpack and follow the passage to another cacodemon sitting next to a yellow flesh column, then go behind this column to press an eye switch behind a fence. Go back to where you found the backpack and head east through a wall that has lowered, then go through the doorway in front of you to find the red skull key in a small chamber. On Hurt Me Plenty skill level or higher, a baron of Hell will rise from the floor when you enter the chamber.

Go back to the starting room and open the marble wall with the hanging corpse to reveal a skull switch that will open several doorways in the surrounding area. Go back to the doorway that led to the red key and go through a second doorway next to it, where you will find some imps guarding a rock with an evil eye on top of it. Press the unlit skull switch on the south side of the rock then go back through the doorway and head south to find a chaingun surrounded by spine columns - taking the chaingun will lower some of the columns to reveal imps and an armor. Head south through another doorway then turn left to cross a bridge leading to the yellow skull key.

Go back across the bridge and head west, looking left to see a large marble door with yellow skull markers. Take the large ammo pickups in front of the door then open it to reveal a narrow path filled with demons, imps, cacodemons, lost souls and barons. After all of the enemies have cleared the path or been killed, follow it to a group of exit signs and step past them to finish the level.

A chainsaw can be found in the blood north of the yellow key.

Drop into the blood by the yellow key and follow it south and east to a cavern with a teleporter and a baron. The teleporter will send you to a room in the north-west corner of the level with lost souls guarding a plasma gun; you will land on an invulnerability as you enter the room.

Two of the player deathmatch starts (Things 325 and 329) are placed outside the map.