E4M5: The Blood Beneath (No End In Sight)

E4M5: The Blood Beneath is the fifth map of episode Blood Stained Earth of No End In Sight. It was designed by Christopher Lutz. 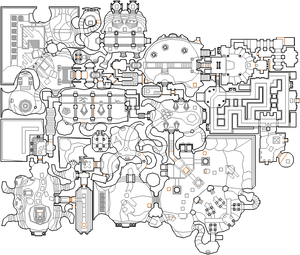 Map of The Blood Beneath
Letters in italics refer to marked spots on the map. Sector, thing, and linedef numbers in boldface are secrets which count toward the end-of-level tally.

Go through the door on your right then follow the lava north-east to land in a room with a shotgun and some zombies. Continue following the lava south, through a short tunnel containing a demon, until you reach a marble archway then follow the white path over some platforms to a ledge with imps. Head east through another arch and climb some steps to enter a large cavern, but do not stay by the steps for too long - a platform to the north will lower to reveal a cyberdemon that will fire rockets at you as you navigate the cavern.

Head east past a pair of flesh bars and cross a wooden bridge to find a chaingun and armor guarded by a cacodemon, then head north over a second bridge until you reach a marble step. You will see some platforms with health bonuses leading west to a lion switch - cross the platforms and press the switch, then backtrack over the wooden bridges and head past the flesh bars you passed earlier, which have now lowered. Climb up the steps to confront some imps then follow the path north over a couple of gaps to reach an eye switch; after pressing this, retrace your steps over the wooden bridges again then turn right to see that another pair of flesh bars have lowered. Pass the bars and climb the steps (collecting some clips on the way) then follow the walkway west over two more gaps to reach a second eye switch which will raise some square platforms over the blood pit.

Backtrack over the wooden bridges again to a second marble step, and head north-east over the platforms you just raised until you reach a box of bullets. A lion switch will rise in front of you - press it to raise a bridge leading to the cyberdemon's platform then cross it to collect a supercharge (this will cause a crusher to fall on the cyberdemon if you have not already killed it). Four alcoves containing cacodemons will open - take the rocket launcher on the cyberdemon's platform then enter the marble tunnel behind it which leads to a cavern with a blood river and some rocks with health bonuses. Go through the west doorway and head down the steps, follow the path west through an area with lots of trees until you reach a staircase with some health bonuses, then climb up to find a door guarded by a cacodemon. Go through the door and head south along some stepping stones with rockets to enter the building with the red skull key.

As you approach the red key it will disappear and be replaced with some flesh bars - turn around and press the lion switch that has appeared behind you, which will lower the entire building into a blood-filled cavern with several monsters. Once the building stops moving, press the eye switch behind the bars to lower them so you can take the key then go through the marble arch in the east wall to find armor in front of a red key door; behind this door is a teleporter that will take you back to the top of the red key cavern. Backtrack to the cave with the blood river, watching out for any monster closets that have opened on the way, then head through the north doorway and follow the dark passage past a spectre to a T-shaped bridge.

Go to the east side of the bridge to confront some imps and a spectre, then go down the steps and turn right to go through a wooden door leading to an octagonal brick chamber. There are two wooden walkways going south and east; take the east path and follow it until you reach the east end of the room where you will find a stepping stone leading to a skull switch. Press the switch, then follow the walkway south and west to another stepping stone leading to a chamber with some hanging corpses. Kill the imps here then step across to a wooden door and open it to find the yellow skull key. Backtrack to the T-shaped bridge, watching out for several monster closets that have opened on the way, then go through the doorway at the west side of the bridge and follow the path up some wooden steps to two sets of skull bars which you can open with the keys.

Open both sets of bars and head west towards a spine wall which will lower as you approach. Press the lion switch behind the wall to be taken up to a tall cavern and follow some marble steps to a raised platform guarded by a baron of Hell and some other monsters. Climb the steps, take the armor and rocket launcher in this area if needed then head east across a wooden bridge to a dark staircase. Follow the staircase past a cacodemon to the top then head east into a room with a blood pool, following the walkway to an eye switch. Pressing the switch will open the north and south walls, and a large number of monsters will start teleporting in - use the rocket launcher behind the south wall and the megaarmor and supercharge in the north alcoves to help you. Once everything is dead, go through the opening in the south-west corner of the room and follow the passage until you find the exit, which is guarded by a baron.

A chaingun can be found on a step at the bottom of the blood pit at the south end of the level.

From the T-shaped bridge, head east until you reach a bloody skin wall with a baron behind it. Make sure you have plenty of health, then drop into the blood pool around the baron and head north and east along a passage until you see a marble step on your right with an imp. Press the satyr switch in this area to lower a lift which you can ride up to a plasma gun and a megaarmor.

After entering the tall cavern past the red and yellow skull bars, head up the stairs to the south to reach an outdoor area with another plasma gun and ammo for this weapon.

In the cyberdemon's cavern at the south-east corner of the level, there is a small space by the marble bridge leading to the third eye switch (at coordinates 1920 by -784) that you can fall into. If you fall into this space you will not be able to get out.

* The vertex count without the effect of node building is 7319.