E4M5: They Will Repent is the fifth map of Thy Flesh Consumed in Doom. It was designed by Tim Willits, with the original layout created by his sister, Theresa Chasar. It uses the music track "Waltz of the Demons." In the Doom Classic port, it has a par time of 3:00.

The map title comes from Luke 16:30: "No, father Abraham, but if someone from the dead goes to them, they will repent." 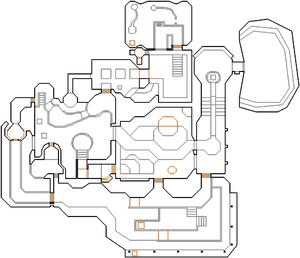 Map of They Will Repent
Letters in italics refer to marked spots on the map. Sector numbers in boldface are secrets which count toward the end-of-level tally.

In the starting room, turn left and go southward to a door. Enter the door. Go to the right in the next room and open another green door leading north. In the hall, go north to a lift and use it to rise. Grab the red skull key in the northeastern corner of the room.

Otherwise, if you do not collect the blue skull key: 2) In the room where you have found the red key, open the red door in the southwest of the room which is noted in the Blue key paragraph. In the room, use the lift ahead to go down. In the marble hall, drop into blood and rise on the stairs in the northwest of the room. Instead of going into the blue door, drop into blood pool to the north. Collect the soulsphere and go into the corridor north. Turn right and proceed southeastward in the next room to get into another room.

Drop down into blood pool northwestward. Open the gargoyle marble. Head into the teleporter. In the other place, walk on the ledge and grab the yellow skull key. Backtrack by using the teleporter pad. Now open the yellow door. Flip the switch to finish the level.

There are 7 uncategorized anomalies in this level's REJECT table.