E4M6: Halls of the Apostate (Heretic)

E4M6: Halls of the Apostate is the sixth level in The Ossuary episode of Heretic Shadow of the Serpent Riders. It shares its music track with E1M1: The Docks and E3M1: The Storehouse. 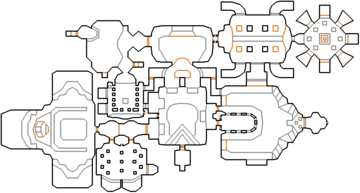 Map of Halls of the Apostate
Letters in italics refer to marked spots on the map. Sector, thing, and linedef numbers in boldface are secrets which count toward the end-of-level tally.

Upon starting the level, you'll be in a quiet room. Once you go through the door in front of you, the action begins in a room with a pool of water. You can find Gauntlets of the Necromancer here as well as some ammo. A switch in the wall lowers a couple of lifts; ride the left one up to the upper level and dash across to the ledge to the left where you'll find a shadowsphere that will come in handy for misdirecting the upcoming monsters if you're wand starting. From the two lifts head around the bend where an iron lich is waiting. There's a Bag of Holding behind you when you face this room, while the panel with the two horsemen is a lift where you'll find a Silver Shield as you ride up another level. Find the Ethereal Crossbow up here and to the left near the yellow door, then head the other way and drop down the chute to find a lava chamber. The switch immediately to your right raises a bridge across the lava, while the one on the left opens teleports you will need to access. Across the bridge, you'll find the yellow key, which is trapped: when taking it sabreclaws will immediately teleport to surround you. Head back across the bridge, drop into the lava, and quickly teleport which will take you back to the ledge above the horseman lift.

Now you can head through the yellow door, where you can follow the ledge along another lava pool. Around the bend you will see the green key. Drop down and get to the other side of the bars, where you'll find three switches. On the far ends, one lowers the green key and opens an ambush which also holds a Dragon Claw, the other opens a pathway back to the water room, where the wall with the blue banner is. Once you have the green key, you can use the third switch near the opening to temporarily lower a lift in the water room, which you can catch to get to the green door.

Through the green door, you can head down the short hall to find the blue key room. Once again, a trap is set on the key, and taking it will drop the walls marked with chained man idols, revealing a large squad of disciples. Once you escape from this room with the key, you can return through the short hallway to the water room near the start, where the lift to the blue key doors is now automatically moving. The door on the right leads to a control room, while the door on the left takes you to a larger area. Go to the control room first and hit two switches to unbar and open the exit door. Then navigate the large room to reach the exit itself.