E4M6: The Mourning Halls (Doom the Way id Did: The Lost Episodes)

E4M6: The Mourning Halls is the sixth map of episode Thy Flesh Consumed in Doom the Way id Did: The Lost Episodes. It was designed by Jeff Shark (Marnetmar) and Gus Knezevich (Alfonzo) based on a level by Sebastian Graham (General Rainbow Bacon). 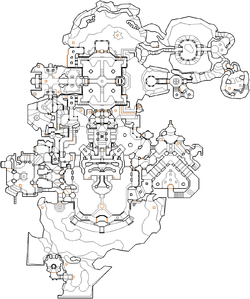 Map of The Mourning Halls
Letters in italics refer to marked spots on the map. Sector, thing, and linedef numbers in boldface are secrets which count toward the end-of-level tally.

* The vertex count without the effect of node building is 6072.