E4M7: And Hell Followed is the seventh map of Thy Flesh Consumed in Doom. It was designed by John Anderson and uses the music track "Sinister." In the Doom Classic port, it has a par time of 2:15.

John Anderson originally titled the level CHIRON.WAD.[1] It was originally a level meant for Doom II before being converted to use only Doom 1 textures and enemies as part of Anderson's collaboration with id Software.

The map title comes from Revelation 6:8: "And I looked, and behold a pale horse: and his name that sat on him was Death, and hell followed with him."

The level is considered relatively easy compared to the rest of the levels in the episode. Due to the lower difficulty many players can beat the map without much trouble on Ultra-Violence, even from a pistol start—unlike most other Thy Flesh Consumed levels. 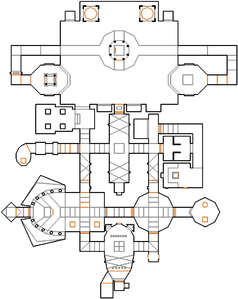 Map of And Hell Followed
Letters in italics refer to marked spots on the map. Sector, thing, and linedef numbers in boldface are secrets which count toward the end-of-level tally.

All three keys are in the level but the only required key is red, while others are needed to get to various optional areas.

Grab the shotgun in the starting area and kill the enemies ahead. Walk up the stairs to your left in this room (west). Atop, turn left and head to the gargoyle panel. It will vanish unexpectedly. Enter the next room with blood at the bottom and four-way paths. Go up the stairs to your right (west). Grab the red skull key lying on the balcony.

Backtrack to the starting room and take the door leading to the northern area (this door requires the red key, although it is not marked with red bars). Outside, drop down into the nukage pit and take the tunnel to the west. Take the radiation suit and open the red bars. Take the lift into the room. Press the skull switch to reveal a baron of Hell. Flip the switch. Leave this room by dropping down into outside area. The switch you have pressed raised two bridges. Walk on the bridge to enter the structure in the middle. A switch will grow from the ground when you enter. Flip the switch to finish.

You can straferun from the courtyard to the exit area, avoiding all the enemies in the west computer room.