E4M7: Dungeons and Demons (Thy Flesh turned into a draft-excluder)

E4M7: Dungeons and Demons is the seventh map of Thy Flesh turned into a draft-excluder. It was designed by Matt Powell (cannonball) and uses the music track "Pseudoverum" by Josh Simpson (EarthQuake). 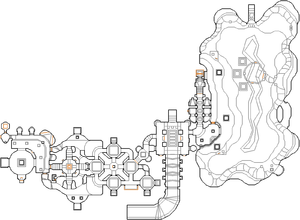 Map of Dungeons and Demons
Letters in italics refer to marked spots on the map. Sector, thing, and linedef numbers in boldface are secrets which count toward the end-of-level tally.

Turn left (north) and go forward to a tall room with wooden ledges and shotgun guys on either side; you can press the east and west walls that have skulls on them to lower lifts which will get you on top of the ledges. Get to the east ledge and head through the doorway in the north-east corner, then follow the passage north past some caged imps, collecting a chaingun and a box of bullets on the way. You will reach some steps leading up to the red skull key - as you start climbing them the cages behind you will open, and a wall will open in front of you to reveal a baron of Hell (or two on Ultra-Violence and Nightmare skill levels) that will teleport down to protect the key.

With the red key, go back to the starting area and head across to the west ledge then press the skull switch on the south wall (requiring the red key) to open a door on your right. Go through the door and turn left to go down some steps to an armor; as you reach the bottom step some demons will teleport in to the area that should be killed before you continue. Head west to a crossroads with a wooden column and go round to its west side to find a skull switch; pressing it will open a pentagram wall to the west, but will also lower four more walls around you with demons, shotgun guys and a plasma gun. Head west through the wall you just lowered to reach a damaging blood pool containing the yellow skull key; approaching it will close the surrounding doors and seal you in. Quickly take the radiation shielding suit in front of you then kill the four barons that teleport in, then shoot the four gargoyle switches that are revealed one at a time to open the doors again.

Head west up some steps to a yellow key door and open it to enter an L-shaped hall with a red floor. Take the megaarmor, medikits, boxes of rockets and energy cell packs in the north-east corner before you press the eye switch in the middle of the hall, as it will open monster closets behind you containing a gang of cacodemons and one or more cyberdemon (on Hurt Me Plenty or higher, the extra cyberdemons will teleport down to your level). Hold them off until the walls either side of the eye switch lower to reveal a pack of demons, then go through and look south to see a skull switch being guarded by a baron. Press the skull switch to lower the column behind it, then walk into the fire wall to finish the level.

You can climb up the seat that the red key was sitting on to reach an alcove with a rocket launcher.

* The vertex count without the effect of node building is 2913.