E4M7: UAC Alpha is the seventh map in the fourth episode of Doom: Damnation. It was designed by Ofisil and uses the music track "Barely Scathed". The par time defined in the DEHACKED lump is 1:30. 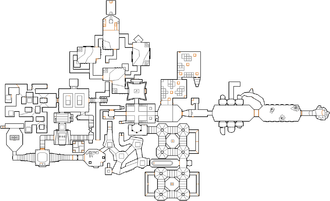 Map of UAC Alpha
Letters in italics refer to marked spots on the map. Sector, thing, and linedef numbers in boldface are secrets which count toward the end-of-level tally.

As soon as the level starts, enter the passage on your left and walk past two zombiemen to a door, behind which is a blue room containing two shotgun guys and a cacodemon. Step through the wall that opens on your left and go down the steps to some imps, then go through the split door in front of you to enter a chamber with shotguns and a baron of Hell. Press the button on the gray block in the south-east corner then take a radiation shielding suit from the south wall and head north into a nukage-filled passage. Continue north to a switch behind a crusher and flip it - this is one of three switches needed to reach the blue keycard.

Return to the starting room and head north into a hall with computer banks, then go through the west door to enter a small maze of dark passages (you can press the switches next to the curved lights to turn them on). Keep heading west and north until you reach the north-west corner then follow the passage here to an impaled corpse with a knife switch next to it - this is the second switch needed to reach the blue key. Leave the passage and head east through a small tunnel to a switch that will re-open the door to the computer bank hall, Go back to that location then pass through the east doorway and turn right - straight ahead is the final switch needed to reach the blue key. After flipping this switch, go back along the passage and turn right at the junction to collect the blue key in front of you.

Open the locked door just before the blue key to collect a plasma gun then turn left to reach a four-way bridge over nukage - two barons will appear ahead as you step on it. Head north into a chamber with tiny light pillars and then west to a neighboring room; from here you can go north or east into brightly-lit tunnels then north to a room containing a backpack and a radiation suit. Head south into one more tunnel and press the button at the end - this is one of three switches needed to reach the red keycard. Return to the four-way bridge and head south to a small room with a button which will lower the lift underneath you, head east up the blue steps then south and east over two more staircases to find a tan passage containing the second button needed to reach the red key; pressing it will open several closets containing zombies and imps, as well as one behind you containing a baron.

Leave the tan passage then go south into another octagonal chamber, west up some blue steps and continue west into one of the monster closets that opened when you pressed the button - there is another button in this closet that will open a door blocking your way back to the lift. Backtrack to the four-way bridge and head east to a tall room with armor and a rocket launcher; the red key is in an alcove in the south-west corner of this room. Head north to a platform above a storage room full of crates and drop to the floor below, then head north-east until you reach a low doorway leading to a second storage room; in the north-west corner of this room is the button that will remove the final set of bars blocking the red key. Go back to the platform at the entrance to the storage area and press the button on the east wall to lower it, then press the north button to raise the platform again so you can reach the red key.

From the red key, head east to a wooden door requiring that key and approach the skull switch behind it; you will drop down a hole to a hall with a cyberdemon waiting in ambush. Press the eye switches on the east wall to lower a platform holding the yellow keycard, then go straight through to a second hall with an invulnerability (or supercharge on Ultra-Violence and Nightmare skill level). Open the yellow key door in the east wall and drop down the hole behind it, then step on the patch of sky in front of you to finish the level.

In the room with the two computer banks, you will see a chaingun behind some silver bars. Press the button on the north side of the west bank to lower the bars, as well as revealing some demons.

Thoroughly search the passages west of the computer bank hall to find a chainsaw and an armor.

While standing on the platform above the crate area, run north to reach a crate with a berserk pack on it.

* The vertex count without the effect of node building is 3498.