E4M7: Vacuum Consortium is the seventh map of episode Blood Stained Earth of No End In Sight. It was designed by Xaser and Jon Vail (40oz). 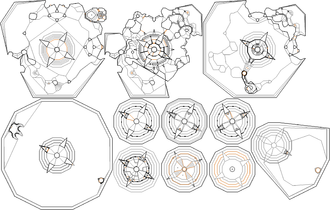 Map of Vacuum Consortium
Letters in italics refer to marked spots on the map. Sector, thing, and linedef numbers in boldface are secrets which count toward the end-of-level tally.

Take the shotgun in front of you then climb up the steps to a large round marble brick structure guarded by imps. Go round to the north-east side of this area to find a bloody wall with a satyr switch next to it; pressing the switch will open the marble structure allowing you to collect a plasma gun and rocket launcher inside it. When you collect the weapons the red walls to the north and east will lower, releasing a large number of imps, demons, shotgun guys and barons of Hell into the area; kill everything then go to the northern red area to find two switches. Flip the west switch (the east switch does nothing and is actually a crusher trap) then go to the eastern red area to find that a teleporter has been revealed which you should step into.

Follow the path until you enter a white cave then head north down some steps to a water pool - two walls will open to your left and right releasing imps and spectres into the pool. Go south-east through the alcove that the demons emerged from until you see a cacodemon on your left, climb the staircase next to it and head north-west over two water streams to a chaingun guarded by another cacodemon, then head east to a teleporter. In the next area, follow the path until you reach a lift which will take you down to a red room with some armor bonuses, then step on the teleporter in the south-east corner. Take the chainsaw on your right then follow the path north to a lift with health bonuses on it. When the lift reaches the bottom, head north through the wall that lowers in front of you to enter the tower.

In front of you are two red staircases guarded by barons; go up the west staircase then turn left and drop down to a passage leading to some steps, which you can go down to find a red room that will teleport you to the second floor. Step forward to collect a supercharge (and a rocket launcher on Ultra-Violence and Nightmare skill levels) then try to go round the red column in front of you; two water pools will rise to reveal a large number of spectres, so kill them while you wait for the bars blocking the exit from this floor to open. Once the bars open, step through them to find a red room leading to the third floor. This floor is seemingly empty except for a shotgun guy; however, when you approach the skull switch in the south-west alcove the room will change to a series of narrow ledges over harmful blood pools. Carefully make your way across the room, destroying any lost souls that get in your way, to reach a second skull switch in the north-east alcove which will open the bars blocking the north-west alcove. Kill the cacodemons that teleport in then enter this alcove to find another red chamber that will teleport you to the fourth floor of the tower.

Flip the switch in front of you to be taken down to the fourth floor, which has four red platforms. Drop to the tiled floor below and head north-west across the sky (which you can walk on) to a skin building containing many lost souls and an eye switch; after pressing this switch, head south-east past the tower to a small round building and enter it to be teleported to a monster-free area, then head straight forward to some steps leading to a red wall that you can walk through to reach the fifth floor of the tower. Dispose of the many zombiemen on this floor then step on the south-west teleporter to reach the sixth floor, which is an upside-down copy of the previous floor populated by spectres, cacodemons and imps. Kill these monsters then head east through a set of red bars that have opened - the red alcove behind them leads to the top floor of the tower.

Take the invulnerability in front of you (or supercharge on Hurt Me Plenty skill level or higher) then drop down to the floor below where two cyberdemons will teleport in. There are three switches on this floor that will be revealed in order - flip the switch in the north-west corner, followed by the north-east corner and the south-east corner. After flipping the third switch the red floors will rise and become lifts - ride the north lift up to a lion switch and press it, then head up the steps that rise behind you and step into the column at the top to be teleported. Step forward to drop down to an empty area then run in any direction until you pass the scrolling exit signs to finish the level.

After entering the water pool in the white cavern you will be ambushed by imps and spectres. Go up the steps that the imps were guarding to find a berserk pack.

After entering the first floor of the tower (with the red staircases), go up the east staircase to a blood pool and flip the switch here to raise three platforms. Go up the west staircase and step across the platforms you just raised, then climb some steps to a red chamber that will put you inside the marble building in the white cavern you traversed earlier. The walls in this building will open as you pass them revealing barons; eventually you will reveal two openings in the south and north-east walls of the building that lead to a plasma gun and a megaarmor respectively.

After reaching the top floor of the tower with the cyberdemons, you can save time by pressing the switch to raise the red platforms without revealing it first.

* The vertex count without the effect of node building is 5326.