E4M8: Hell on Earth is the eighth and final map in the fourth episode of Doom: Damnation. It was designed by Ofisil and uses the music track "Hidden". The par time defined in the DEHACKED lump is 3:00. 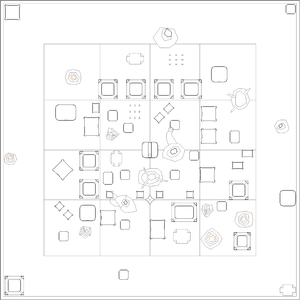 Map of Hell on Earth
Letters in italics refer to marked spots on the map. Sector numbers in boldface are secrets which count toward the end-of-level tally.

Once all the spiderdemons are killed, a star-shaped red brick structure due south of the starting point will lower to reveal two to four cyberdemons and a gargoyle switch. Kill or avoid the cyberdemons as you press the switch, then return to the building in the middle of the city to find that the pentagram wall on its north side has lowered. Go into the skin passage and step on the patch of sky at the end to finish the game.

There are three stepped red rocks around the level that have different items on them. The rock due west of the starting point holds a berserk pack, the rock in the south-west corner holds an invulnerability and the rock in the south-east area holds a supercharge (or another invulnerability on I'm Too Young To Die and Hey Not Too Rough skill levels).

* The vertex count without the effect of node building is 1685.