E4M8: No End In Sight is the eighth and final map of episode Blood Stained Earth of No End In Sight. It was designed by Emil Brundage (NaturalTvventy) and Xaser. 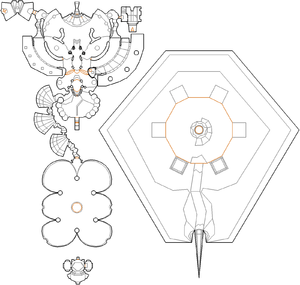 Map of No End In Sight
Letters in italics refer to marked spots on the map. Sector numbers in boldface are secrets which count toward the end-of-level tally.

Grab all the items and weapons in front of you, ready the BFG9000 then step into the teleporter. You will land in a large chamber with one to three spiderdemons; kill them quickly as the floor will change to lava after a few moments, then head through the wall that lowers on the north side and follow the passage behind it until you reach a red brick column. North of this point is a large skin structure with many eyes - you must reveal the structure's weak point in order to destroy it while dealing with monsters that teleport in, making it functionally similar to an Icon of Sin battle.

Either side of the red column are pentagram lifts with skull switches next to them - press the west switch then ride the lift next to it up and follow the passage until you reach a yellow door and a blue keycard, then go to the east pentagram lift and ride this one up to a second passage leading to a blue door and a yellow keycard. With both keys, go through the blue door to a room containing armor and several boxes of bullets, boxes of rockets and energy cell packs then step on the lava arrow to be teleported to a platform underneath the skin structure. Press the skull switch in front of you (watching out for a nearby cyberdemon on Ultra-Violence and Nightmare skill levels), then backtrack to where you found the blue key and go through the door here to drop into room with a star-shaped hole. The hole will teleport you to a second skull switch which you should press quickly.

Go back to the red column, where a spine lift has risen. Walk up the steps next to the lift to find many boxes of rockets and press the skull switch behind them, then ride the spine lift up to see that a large hole has appeared in the skin structure ahead of you with lots of cacodemons emerging from it. Clear the enemies away using the BFG9000 then fire rockets into the hole until you hear lots of explosions - if the structure shuts, press the skull switch in front of the spine lift again to open it). Ride the spine lift back down then head south to find that a bridge has risen over a lava pit, which you can cross to find a blood teleporter. Step into the teleporter then quickly run forward as the buildings around you collapse into the lava - once the central column has stopped lowering, walk into it to finish the game.

A partial invisibility, supercharge and radiation shielding suit can be found on the lowest platform under the skin structure.

This information was last verified in its entirety on August 31, 2021.

* The vertex count without the effect of node building is 6603.

A monster closet is placed at the south end of the level, with lots of monsters on platforms of varying heights; once a player enters the main arena the platforms will start to descend, allowing monsters to teleport in at regular intervals. A large number of barrels are placed behind the hole in the skin structure, positioned so that they cannot be hit with direct attacks; only the splash damage from rockets can damage them. When the barrels explode, it sets off a chain reaction; the exploding barrels will teleport into the closet and kill anything that has not yet entered the arena.