E4M8: Palace of Destruction (Thy Flesh turned into a draft-excluder)

E4M8: Palace of Destruction is the eighth and final map of Thy Flesh turned into a draft-excluder. It was designed by Matt Powell (cannonball) and uses the music track "MM_01," originally composed by Rich Nagel for Daedalus: Alien Defense. 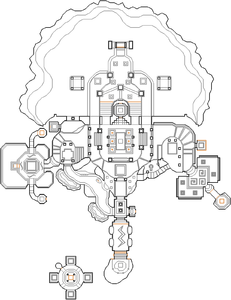 Map of Palace of Destruction
Letters in italics refer to marked spots on the map. Sector numbers in boldface are secrets which count toward the end-of-level tally.

* The vertex count without the effect of node building is 3444.