E4M8: Shattered Bridge is the eighth level in The Ossuary episode of Heretic Shadow of the Serpent Riders. Like the other level eight slots, the boss tag 666 is active, here keyed to the Iron Lich. 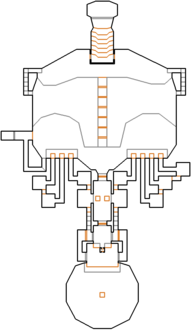 Map of Shattered Bridge
Letters in italics refer to marked spots on the map. Sector numbers in boldface are secrets which count toward the end-of-level tally.

From the start, head down and make a U-turn around the structure you emerge from to find the Dragon Claw. The titular shattered bridge is here, with many nitrogolems firing at you from across the water. Take out as many of them as you can; the bridge itself is operated by an obscure trigger mechanism where sections of it will raise when your shots hit the spinal column pillars on the far side. In the course of the firefight with the nitrogolems across the water you'll probably hit enough of them without even trying that you'll be able to dash across any remaining gaps.

On the other side of the water, you'll notice several spinal column platforms that slide up and down. The easternmost one leads to the ever-handy Ethereal Crossbow while the second-to-westernmost one will take you to a Hellstaff. All of the spinal column walls in these areas are secret doors and lifts connecting the upper passages. The second-westernmost lift is important for another reason, as well: when you cross between it and the raised corridor it leads to, a lift will drop nearby. Go back and follow this lift up, looping around back to the bridge area and taking note of the wall with the two spinal column motifs on it just before the dropoff. Go through this loop a second time, and the wall in question will have lowered granting access to the yellow key.

Head to the yellow door, which is down the central passage from the bridge. The spinal column walls in your way are lifts which can be lowered by using them. On the other side of the yellow door, find a switch, pull it, collect the Phoenix Rod that is revealed and pull the second switch right next to it. The large spinal column wall lowers revealing a large group of iron liches. Destroy them all and the exit teleport will lower, allowing you to complete the episode.