E4M8: Unto the Cruel is the eighth and final map of Thy Flesh Consumed in Doom. It was designed by Shawn Green and uses the music track "Demons on the Prey". It features a boss battle with the spider mastermind. In the Doom Classic port, it has a par time of 6:00.

In the Sony PlayStation and Sega Saturn versions of Doom, finishing this level takes the player to MAP29: Twilight Descends, rather than ending the episode.

The map title comes from Proverb 5:9: "Lest thou give thine honour unto others, and thy years unto the cruel."

Just like Knee-Deep in the Dead, and unlike The Shores of Hell and Inferno, the level does not automatically end upon the death of the boss. Its death, however, will lower the area's center which you can walk into to exit. You can instead choose to also kill the other monsters if you wish. In the PlayStation and Sega Saturn ports, the level requires Hell knights to be killed instead. 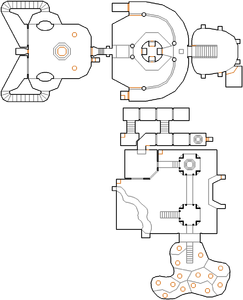 Map of Unto the Cruel
Letters in italics refer to marked spots on the map. Sector, thing, and linedef numbers in boldface are secrets which count toward the end-of-level tally.

At the very start, destroy any Imps, grab any weapons and ammo and run down the stairs. Hit the skull switch to open the door and arrive at the room containing the "green main pillar". Kill every enemy in this room - beware of their numbers depending on the skill level you are playing, because they are mostly hitscan-weapon enemies such as troopers and shotgunners -, then open the green, demon-themed marble door at the north side room and grab the red skull key inside. Go to the green "pillar", open its north face, kill the monster and hit the switch. This will cause a bridge to raise at the middle of the lava moat below - if you fall into the lava moat, be sure to quickly pick up any radiation shielding suits available and kill any demons and/or spectres who are lurking around, the use any of the northern/southern steel lifts to go back to the upper floor. Go to the south side room, open the door and take the teleporter.

You are in a wider open-air area with several enemies, so if you find yourself wide open to enemy fire run up the stairs to the nearest "open cage" (grab the plasma gun near the base of the other "cage" before climbing up the stairs). South of it is a space with harmless water "floor" and several tall pillars containing useful goodies (you can simply hit the Use key near each pillar to lower it and take the goodies). Cross the bridge that connects the "open cages", then enter the wooden room. Hit the skull switch to lower the lift (watch out for possible demons and barons of Hell, depending on the skill level you are playing). Grab the yellow skull key. Climb up the nearest set of stairs, then climb down another set of stairs to reach a room containing a soul sphere near another teleporter. Step through it and you'll be warped back to the room containing the "green main pillar". This time open its south face, wipe out whatever monster hides inside and hit another skull switch. Doing so, a set of stairs will form up to the final, skull-decorated door.

You are now at the final area of the level (and the game as well). The green pillars at this room contain another soul sphere and an invisibility sphere. These may come in handy for battling against the spiderdemon hiding behind the big pillar. Once you kill it, the big pillar at the center of the room will lower, revealing the portal back to Earth. Unlike previous episodes, the level will not end automatically once you defeat the episode boss, so if you want, you can choose to enter the adjoining upper rooms and finish off the last enemies that will appear - including a pair of barons, one for each room. Once you are done with killing all enemies and picking up all items you want, step through the big portal to end the level.

Congratulations for finishing the game! Now just kick back and enjoy watching the ending sequence!

There are 33 uncategorized anomalies in this level's REJECT table.

The four player starts (Things 0, 1, 2 and 7) have no flags set for any of the three difficulty classes, but because of special handling in the engine, they function normally in the level.

A cacodemon (Thing 121) has no flags set for any of the three difficulty classes, so does not actually appear in the level.