E4M8 is the eighth and final map of the fourth episode of Heroes. It was originally designed by Bruce A. Bacher as TGMO2.WAD (Training Ground of the Mad Overlord - 2), then modified by Albert Dewey for the compilation. It uses the music track " ". 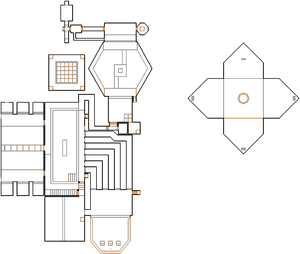 Map of E4M8
Letters in italics refer to marked spots on the map. Sector numbers in boldface are secrets which count toward the end-of-level tally.

As two secrets cannot be obtained (see above), the maximum achievable secret percentage on this level is 60%.