E4M9: Fear is the secret map of Thy Flesh Consumed in Doom and can be accessed from E4M2: Perfect Hatred. It was designed by Tim Willits and uses the music track "Hiding the Secrets". In the Doom Classic port, it has a par time of 3:00. 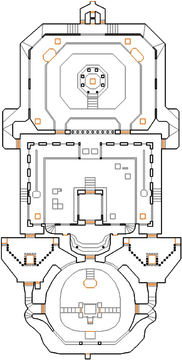 The yellow skull key is the only key to collect in this level. In the starting outside area enter the door ahead. Grab the shotgun of the dead man and head into another door before you. In the next room, there are two switches located east and west. It is enough to press just one or if you want press them both. After that, return back to the starting place. Enter the northern corridor, as the blocking-way bars (or just one) are lowered. Go to the east of the corridor. Face south here and walk on the narrow ledge toward the yellow skull key.

After collecting it, backtrack into the corridor and open the northeastern door. Advance on the corridor toward two exit doors in the north. Enter either one, then flip the lever to end this level.

There are 25 uncategorized anomalies in this level's REJECT table.

It is possible to get stuck without being able to die or exit the level by straferunning or rocket jumping into the pool of water next to the chaingun.

In multiplayer games it is possible to get stuck in the cage located at the centre of the southern egg-shaped area. This is because the switch to lower the cage walls is blocked by a short green pillar decoration that only appears in multiplayer. The only way for the stuck player to get out of the cage is to die and respawn elsewhere or if another player lowers the cage walls from outside of the cage. 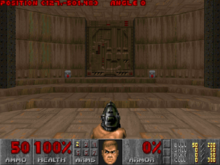 Location used for the background of Super Turbo Turkey Puncher 3.