E4M9: Mausoleum is the secret map in The Ossuary episode of Heretic Shadow of the Serpent Riders, and can be accessed from E4M4. 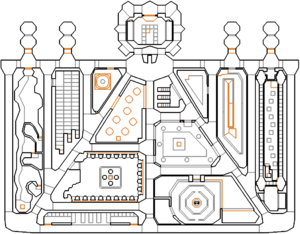 Map of Mausoleum
Letters in italics refer to marked spots on the map. Sector numbers in boldface are secrets which count toward the end-of-level tally.

You begin in an area that's hooked up with the level's main network of corridors, which is infested with a whole legion of marauding monsters; not just both varieties of gargoyle and golems but also nitrogolems and even iron liches which can freely hunt you through these halls once alerted. There is no safe haven here until you carve one out, which should be a priority especially if you're wand starting.

For your first order of business, unless you've carried a pair from a prior level, go behind the structure you start at and collect Gauntlets of the Necromancer. Next head down the corridor that leads due west from the starting point a short ways, looking for the green-eyed demon face marking a hidden door on the left-hand wall. Inside you'll find a Bag of Holding on a pedestal in the middle of a pool. A crusher activates when you step in the pool; try to use it to your advantage and get some monsters smashed instead of yourself. This room will serve as a stronghold to retreat to when you need a relatively safe base of operations to pick off roaming enemies in the early stages of the map; iron liches are too big to get past the brazier near the entrance and smaller enemies can be lured into the crusher. To the back of the room is a switch to be pulled. At this point, you may wish to go collect the Tome of Power in the nearby chamber to the north as well, but doing so releases some iron liches so you will have to weigh the pros and cons of this given your approach.

When you're ready to move on, head to the corridor leading southeast from the start. The switch has opened a small black iron chamber with stairs leading to a teleport. Through the teleport is a dark room with pillars where you'll find fire gargoyles and an Ethereal Crossbow. Once you've cleared this room, press on the wall that has the raven motif. As you're leaving the room, the pillars raise, revealing timebombs, but beware as these pillars turn into crushers once you walk under them.

Go back to the black room with the teleport. A second teleporter has opened and this one leads you to a chamber made up of rings of rough-hewn stone walls. At the center, there's a column that will rise if you shoot it with the Wand or Dragon Claw. Inside you'll find a switch, which opens the outer walls of the room, releasing some nasty monsters, so be ready for a bloody fight. Once you've cleared the area, you can find the exit to this chamber now open, facing a cage inhabited by undead warriors. Since they're confined, don't bother trying to kill them yet, the ammo is better spent on creatures patrolling the main halls. Head back to the black teleport room to find a third teleporter opened, which you should warp through now.

The teleport comes out in a wood and tan brick room illuminated by many braziers. A switch tucked away in one corner lifts one of the columns in the lava pool, revealing the Dragon Claw. Collecting it opens the exit to this area back to the main corridors. From here head briefly southwest then due north to a tan brick chamber with tall stairways. Head downstairs and teleport again. Now you're in the cage with the undead warriors so be prepared for an immediate fight if you didn't pick them off beforehand. In this room is the Hellstaff and a teleport in the center. Pull the switch, teleport, and rush across the lava as quickly as you can to escape. By this point, you're well-armed enough to clean out the corridors if you haven't already. Go back to the tall stairs room and go upstairs this time, to another teleport.

Finding yourself in a claustrophobic tan brick area, it may not be immediately obvious what to do. Just remember that red banners are walls but blue banners mark hidden doors, and navigate accordingly, heading upwards. When you reach an area with divided platforms leading back downwards, take care not to fall, and eliminate any monsters that might block your path, then dash down along the pathway that the platforms create. If you do fall, rush to the far end to teleport out of the lava and try again. Completing the area grants you the Phoenix Rod and opens the final teleport in the tall stairway room, at the bottom of the far set of downward stairs.

The next area you teleport to is a spiral of narrow corridors where a rapid-fire weapon is the ideal choice as you head forward. Just follow the hall to the end, where the walls will lower causing the area to become a larger room. Run to the skull wall, then head back as the yellow key platform lowers. Once you've grabbed the key, leave this room and head back to the starting area, then into the tan brick corridors immediately north of the starting point. Open the yellow door and burn any surplus combat items you have to kill off the disciples and iron lich. To the sides, one switch lowers the exit pad while the other raises the stairs that let you reach it.

* The vertex count without the effect of node building is 1754.